A person who I wish wouldn't stay anonymous wins our prestigious Comment o' the Day Award, explaining the unvarnished idiocy (or outright traitorous behavior) of the GOP establishment in far more cogent terms than I could:

Boehner and the GOP elite are playing checkers while Obama and his comrades in the Democratic National Communist party are playing chess. So let me explain to you all what is going to happen in the next few months. 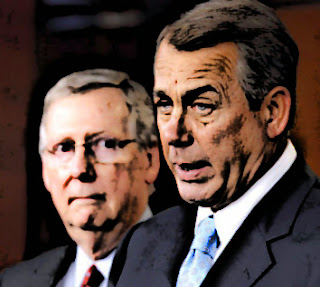 First of all, when the time arrives to ‘defund’ homeland security it will FAIL. The socialists will all scream in unison about national security and suddenly be worried about terrorism and disease entering the country (and anything bad that does happen will be blamed on the GOP naturally). They will be everywhere talking up this now found appreciation for Homeland Security and it will be funded and thus Obama’s Illegal Amnesty will be set in stone.

This will take place as millions of illegal invaders flood over the border causing all kinds of “serious crises” that will have to be addressed with, you guessed it – more government!

[BTW, did you know that upwards of 150 Million Adults Worldwide would like to ‘migrate’ to the US?]

And so that part of the budget will be funded as well, and by the time the next opportunity to defund the illegal amnesty it’ll be too late – by then millions of illegal invaders will have crossed the border.

As soon as Obama’s illegal amnesty has the imprimatur of legitimacy attached, the socialists will then clamor for the ‘civil rights’ of the illegal invaders – healthcare, housing, food stamps and last but not least: The Right to Vote.

You can bet your life that by the next ‘election’ millions of new minted citizens will be all ready to vote themselves some more of that sweet taxpayer loot they are ‘entitled’ to just because of all the past wrongs committed by the country (don’t ask me to explain the ‘logic’ of that – I don’t get it either).

And with millions of new looter brethren on their side the quote from Alexis de Tocqueville will apply:

”The American Republic will endure until the day Congress discovers that it can bribe the public with the public’s money.”

And the Democratic National Communist party will have their ‘permanent’ majority (at least until the country implodes).

Somewhere in there the economy will have another downturn – necessitating another huge expansion of the government over our lives.

And of course the new ‘majorities’ in the Southeast will begin calling a ‘restoration’ of that region back to Old Mexico or to be independent nations.

Hey, but some selfish buzzards will get their cheap labor, so who cares what happens to the country!

Say, I wonder what the super-genius Jen Rubin has to say about this? Actually, I don't.

"And of course the new ‘majorities’ in the Southeast will begin calling a ‘restoration’ of that region back to Old Mexico or to be independent nations."

Did you mean to write "Southwest"?

The problem with defunding DHS, in order to prevent executive amnesty is that Obama wins either way. if we defund DHS then he will claim he doesnt have the money to deport anyone, if we don't defund, he simply wont. He doesn't WANT to spend money so how does refusing to give him money he doesn't want to spend helping? we lose either way and we actually lose more if we do defund. what is needed is defunding stuff he WANTS to spend money on and holding it hostage to keep him from backing out on any deal by funding something he desperately wants in only quarterly increments requiring a full congressional vote to renew funding. if he reneges, simply stop funding what he wants funded until he comes back to heel. but the Cramnibus bill threw that baby out with the bathwater.