The "CRomnibus" government funding bill passed handily last weekend, but not before Senators Lee and Cruz had their say. In a controversial move, the two senators managed to put their colleagues on record voting for or against funding President Obama's latest unconstitutional executive power grab. Many Republican senators, however, protest too much, claiming that Lee and Cruz may have allowed the Democrats to pass a number of executive nominees because of their insistence upon making their point. 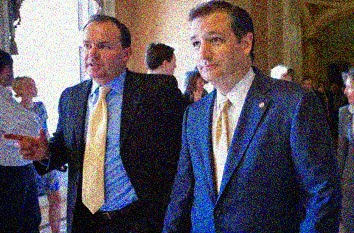 As the story goes, Democrat Senate Majority Leader Harry Reid had promised to adjourn the Senate after passing the CRomnibus and a couple of other bills, leaving these controversial nominees on the table. The Republicans lambasting Senators Lee and Cruz are making the argument that Reid was absolutely, totally going to keep his word and not advance these controversial nominees. As Senator Lee has pointed out this was not only unlikely, but it would be “political malpractice” for a departing Democrat majority leader to fail to cram through every one of his president’s nominees as possible. In Lee's words, "if you think… that [Reid] was going to leave town without confirming everybody that he wanted to confirm in the post-nuclear Senate, they’re crazy."

Even the same day that Lee and Cruz put forth their point of order, Reid and the Democrats were reportedly searching for ways to get their nominees through before the end of the session. Were Lee and Cruz really supposed to let Reid’s non-binding promises stop them from exercising their ability to get the Senate on the record against executive overreach?

The point that dissenting Republicans are covering up is that their party alone could and should have held up the bloated spending bill on account of its many flaws, but they chose not to. But apparently, they were more concerned with getting home for the holidays without controversy, since 77 Senators, including 28 Republicans, voted to let the bloated Cromnibus through without a contest.

In the end, the real story is that a few principled senators exercised their ability to force their colleagues to go on the record supporting a massive presidential breach of Constitutional authority. The fact that their fellow Republicans are upset about this speaks volumes.