A post by Leslie Eastman at Legal Insurrection set me off an a hunt for the signage behind this story. It didn't take long:

I suspect Santa will be bringing former New Jersey principal Antoinette Young a dictionary for Christmas this year. 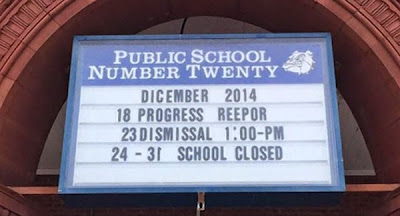 A large sign outside a New Jersey elementary school that misspelled “December” appears to have cost the principal her $108,000 a year job.

The Bergen Record says the sign outside School 20 in Paterson also notified people of the date for “progress reepor” and contained a backward numeral 1.

City school board member Corey Teague circulated a photo of the error-filled signage and complained why nobody noticed for more than a week. December was spelled “Dicember.”

“If this is how the administration takes care of signage, how can we expect the students to do better? We must be held to a higher standard,” he wrote in an email accompanying the photo.

Days after Teague brought up the sign, education officials announced that the principal, Antoinette Young, was being demoted and transferred to another school.

By all means, libs, let's make sure that the poorest kids and their parents have no choice when it comes to their education.

Let's lock them into failing public schools where there's literally no accountability for teachers or administrators.

Because teachers' unions are for the children, right?

Yo, dat principle jus' be disleksic, yo! Y'all be raciss an' sh*t!

How about the idiot NY judge who released a cop-hating animal named Maye, who still swore death threat even up to his release:

"I would have unquestionably released Mr. Maye a week ago without even thinking about it."
Judge Laura "Redundant" Johnson

Some people don't think when they do, OR when they speak.