The Uniparty in Washington, which consists of the Republican Establishment and the Obama-Pelosi-Reid Democrats, is angry -- very, very angry -- that they were forced to work over the weekend by a few Constitutional conservatives in the Senate. 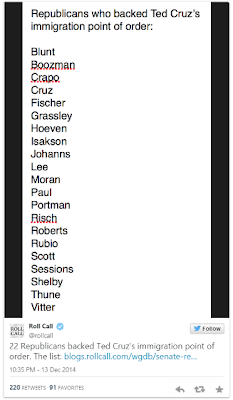 A chorus of voices, ranging from Mitch McConnell's press agent Jennifer Rubin to the GOP Establishment's favorite progressives at Politico, gleefully pointed to the failure of Cruz's amendment on the Constitutionality of Obama's Amnesty Order.

As Erick Erickson explained last night, the Cruz-Lee strategy had no impact -- none -- on the confirmation of Obama's nominees despite the whining from GOP leadership.

Yesterday Cruz explained the strategy, which shows he is a far more strategic thinker than the preposterous Uniparty hacks cloistered inside the Beltway:

Forcing a vote on the constitutionality of Obama's amnesty is important for two reasons. First, since President Obama enacted his unilateral amnesty after the elections, Democrats have never been made to answer for it. Tonight, they will and they will show America whether they stand with a lawless President, who is defying the will of the voters or the millions of Americans who want a safe and legal immigration system.

Second, it allows Republicans to also show they are committed to ending Obama's amnesty once and for all in the next Congress. If we agree it is indeed unconstitutional, we have no business funding it when the GOP controls Congress next year.

The Constitution matters, and we must defend it. That is why we have fought so hard to ensure this vote.

Stunningly, and despite the overwhelming midterm repudiation of Obama's policies, there were 20 Republicans who voted in support of Obama's assault on the Constitution, and it will come back to haunt many of them.

The list of yes votes on @SenTedCruz motion is heavy on GOP sens up for reelection.

Cruz was looking ahead to the 2016 Senate races. And he won.

He highlighted, for all of the world to see, that the GOP supported Obamacare and the illegal Amnesty Executive Order. Instead of passing a short-term CR, say for two months, the hacks in the GOP gave Obama everything he wanted. They funded essentially all of the federal government until October of 2015, hamstringing the new majority that will take the reins in January.

The American people are disgusted with this activity. God Bless Ted Cruz and Mike Lee.

We're coming for you Uniparty hacks in 2016, because the Democrat and GOP Establishment have become one. Only a Constitutional Conservative can begin to unwind the federal leviathan.

Were they alive today, America's founders would be enjoying beers tonight with Ted Cruz and Mike Lee while ridiculing the pathetic, cowardly and bought-off Establishment elites.

About Ted Cruz. This guy isn't careless about what he says, so I have to take his evaluation seriously. And, if I do that, Mr. Cruz seems either not so bright as people think he is, or worse.

I hope he's wrong, but if he isn't, then none of them are any good.

Erick Erickson explained in detail why that assertion is wrong.

Thanks. That makes more sense.