There's only one problem with their plan: Constitutional Conservatives are the American people; therefore, any attempt to destroy conservatism is an attempt to eradicate the fabric of America:

1 The news is that the Republican Speaker of the House has thrown in with Barack Obama. I don't care what the Democrats are doing. What does that matter? Holy smokes: John Boehner has just squandered the election results before the Republicans even are sworn in to run the Senate... 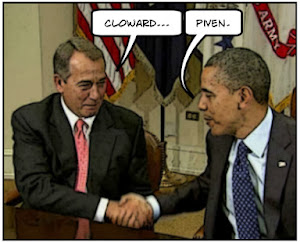 3 [Campaign contribution] limits have practically been obliterated, which means that corporate donors can just start giving left and right. It used to be a limit of $37,000. Now it's $737,000, something... You know why? The Republicans put it in... This is how corporate America's gonna defeat the Tea Party. By allowing limitless donations from that crowd under the rubric that it's campaign finance and money is speech and freedom of speech and First Amendment. The theory is that Main Street, Tea Party people can't come close to competing with corporate money.

6 ...Stutzman said, "I supported the rule because I was informed by leadership that the cromnibus was dead and a short term CR would take its place." He was lied to flat-out because they didn't pull the bill obviously. They lied to him to get his vote.

7 ...he was told they would pull the full-fledged bill after they won the rule, but they had to win the rule for their reputation, for image, you know, protect Boehner's Speakership and all that. "After President Obama came out in favor of the cromnibus, Republican leaders spent the day whipping their members and hoping that Democrats would deliver the requisite number of votes." What you had at the end of the day, Barack Obama was whipping votes for John Boehner.

8 Elizabeth Warren, is, for all intents and purposes, threatening to shut down the government. Now, where this thing is in the Senate's kind of up in the air, but she's threatening to shut down the government. And the media is praising her. The media is praising her for principled opposition. And, as you know, Republican shutdown, why, it's the end of the world, it's the end of everything as we know it.

9 Why was and why is Barack Obama whipping votes for John Boehner? ...The reason is because the media is reporting this as, for all intents and purposes, a done deal. They are reporting that all the action was in the House, and once the House voted for the $1.1 trillion omnibus, since the Democrats run the Senate it's a fait accompli that it's gonna get done. [But t]hat's not the case because there's a flamethrower over there named Elizabeth Warren, and she's not happy with what's in the Republican bill -- and neither, for that matter, is Nancy Pelosi. So the Senate's not done on this. They did a couple-of-days spending bill, and the Senate's gonna take its time and still argue about it, debate this. Now, the consensus is that the Senate will ultimately pass it, because that's what Obama wants, and the Democrat Party's still loyal to him.

10 President Obama and John Boehner want a bill that the bases of their respective parties reject. Boehner is enabling (or did enable) the passage of a bill in the House that the Republican base wants no part of. They don't want Obamacare fully implemented or funded, and they do not want Obama to get away with this executive amnesty. Boehner has worked with Obama to fund Obamacare and Amnesty.

11 ...the Democrats are not invested in Obamacare to the degree that you would believe. Remember, Obamacare is why they lost, in their minds -- and you've heard by now the old stat that half the Democrat senators remaining in the Senate who voted for Obamacare, for one reason or another, are gone. We've had Chuck-U Schumer and Tom Harkin and a number of other Democrats publicly throw Obamacare under the bus claiming it was bad bill... But Boehner has picked up the slack there with the Republican omnibus bill, which fully funds it.

12 Why are Barack Obama, Joe Biden, Harry Reid, Steny Hoyer, working so hard on John Boehner's behalf? ...The reason why is it's Boehner's doing their bidding. It's Boehner's bill they want. Boehner, the Republican Speaker of the House. His bill is what Obama wants. That's why they're working. That's why they're whipping votes for Boehner. That, to me, is what's newsworthy today. Not the fact that there may be some fallout in the Democrat side.

It is mind-blowing how this asshole Boehner is still in Congress, let alone elected three times as GOP Squeaker.

But we did it to Eric Cantor, and we can do it again.

We have to starve the GOP to death and replace it with the Tea Party, much like the Whig Party was put out of its misery by the GOP in 1860. Oh yeah: we need to boycott the business who pour money into the GOP, or the tv programming that features the likes of GOP scumbags like Karl Rove.

Hey, did you hear? - Pee Wee Prebus is up re-election for GOP Chairman!