Gun Control: To some, concern over a U.N. Arms Trade Treaty set to take effect Dec. 24 is much ado about nothing. But a president unconstrained by Congress or the Constitution may try to impose severe limits on gun rights. 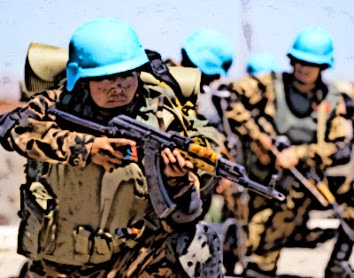 All treaties must be ratified by two-thirds of the Senate, and that's not about to happen in the case of the unratified Arms Trade Treaty (ATT), particularly after the 2014 election that gave the GOP Senate control.

The same, of course, could have been said about the Kyoto Protocol and other climate change deals that mandate that governments tie their economies in knots to meet arbitrary emission goals to save the planet. The Senate has not and won't ratify any of those either.

Yet a president who pays no attention to Congress or the Constitution has through Environmental Protection Agency regulations sought to impose Kyoto and cap-and-trade through regulation and fiat.

The Orwellian-named United Nations Office for Disarmament Affairs, which has disarmed none of the world's tyrants or terrorists, has announced on its website that the ATT will take effect on Christmas Eve, a lump of coal in the stockings of anyone who believes, as our Founding Fathers did when they wrote the Second Amendment, that guns in the hands of private citizens are the best defense against predators, terrorists and, yes, tyrannical governments.

The Obama administration and its allies at the state and local level have gone after our Second Amendment gun rights through what they call "common-sense restrictions," and it wouldn't be beyond this president to seek to implement the treaty's gun-control provisions with his phone and pen as he's done with climate change.

Article 12 mandates that the list include the "quantity, value, model/type" as well as the identity of the "end users" of each weapon covered under the ATT.

As the Heritage Foundation notes, imported firearms, considered part of the "arms trade" to be regulated, constitute about 35% of the new firearms market in the U.S. This would subject private American gun owners to the provisions of the treaty, ratified or not.

The U.S. is one of the few countries with anything like a Second Amendment, our Founding Fathers having enshrined the right to bear arms in our founding principles in recognition of its being the ultimate bulwark against tyrannical government.

It was guns owned by civilians that freed us from British tyranny. The fact that tyrants, dictators, thugs and gross human-rights violators want to control small arms worldwide is hardly a surprise.

The next meeting of the ATT nations, including the U.S., is scheduled for Nov. 27-28 in Berlin. Remember that this is an administration that has shown more respect for the United Nations Charter than to our own sacred founding document.

Despite assurances, our Second Amendment rights are still being jeopardized by a vague and misguided treaty.

My grandmother shared with me a telling story about the intentions of the government behind gun control. In May of 1959, military green-clad men descended in our little coastal town of Santa Fe, outside of Habana, with lists of names mined from "armerias", as gunshops were known in Cuba. They confiscated all the firearms and searched all the houses of those in the lists. One month later, they came back for the former owners of the fire arms and arrested them for "conspiracy and other treasonous acts against the revolution". Some never returned.

I obtained my CCW in 2007 but I have NEVER purchased a fire arms from an establishment that reports to the government. I WILL only purchase from other law abiding citizens.

The UN can carry on doing whatever it is they pretend to do. I live fine and peacefully in the great plains of our awesome nation, surrounded by like-minded, outstanding citizens.