MARK LEVIN: Yes, this Administration has Blood on its Hands

Via Newsbusters, Mark Levin opens up a can on the racialists: 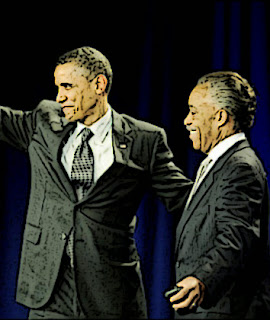 My blood has been boiling, I've been grinding my teeth, listening to all this, watching this, two dead police officers, murdered. President of the United States issues a statement, a written statement. The attorney general of the United States always wants to debate race (with this "nation of cowards"), nowhere to be found. Another coward, another phony. Yes, they do have blood on their hands. No, they didn't kill these police officers. But they have created an environment with their political war against the cops in this country borne out of Ferguson, Mo., with a police officer there whose career is destroyed, who has a death warrant on his own head, was defending himself and shot a thug who first tried to take his pistol and then returned for more!

And out of that, out of that, the president of the United States and the attorney general of the United States, that piece of crap Sharpton, wherever he shows up, isn't it funny, things seem to happen, usually violence. Out of that we get riots! Stores are burning in Ferguson, Mo. People are throwing Molotov cocktails. People are shooting their guns. The liberal Democrat governor pulls back on the National Guard. The police have to walk around with their hands in their pocket, afraid to do anything to protect the citizenry. Borne out of what? A lie! A fraud! Because Michael Brown didn't have his arms up in the air. He was trying to assault, again, if not kill a police officer!

And at the time, as I pointed out, Obama and Holder and their surrogates were throwing fuel on the fire, and that's exactly what they did. Holder even went there, to personally throw fuel on the fire! Then all of a sudden, they say it's not just a Ferguson problem, it's a national problem! My antennae go up, what the hell is going on now? It's a war on the cops. They want to nationalize local police departments. Nationalize them to ruin them! To control them! Every miscreant and malcontent suddenly has a say-so over how our police officers are supposed to conduct themselves. All of a sudden, every cop is supposed to war a video camera. Why? 'Cause they can't be trusted, you know. (Seeing how "every cop is a criminal and all the sinners, saints").

All of a sudden, all the police departments who are overly militarized, why? Has somebody been shot with a tank? All of a sudden, you can't profile. But of course you have to profile, on a legitimate basis. It's done all the time. Obama does it endlessly. And we get a grand jury decision out of New York and all of a sudden the whole grand jury process is corrupt! It didn't matter that there were blacks on the grand jury. Oh no, that doesn't matter! It didn't matter that the sergeant in charge was a female black. Oh, that doesn't matter!  We only learned that five days after the fact.

And you know, ladies and gentlemen, we even have pseudo-conservatives on TV and the radio. Remember? They were wringing their hands, weren't sure how to take a position on Ferguson for the first month. On the grand jury in New York, oh yes, yes, I'm shocked by what happened, shocked. Obama driving his radical leftist ideological agenda. Of course there's a war on the cops! There's a war on the private sector! There's a war on American citizenry! He's fundamentally transforming America and if you fundamentally transform America, law and order goes out the door.

As Jack Coleman asks, "the most chilling aspect of this -- does anyone believe we've hit bottom yet?"

I agree with Mr. Coleman, we haven't hit bottom yet. Unless they are stopped and soon, the communists running this administration will make the next two years horrendous. Think about all that has happened in the last six years. From Fast and Furious to the NSA spying on American citizens, could anyone back in 2007 have thought that all of this would transpire in the years ahead ?

Obama, Holder, Sharpton, DeBlasio, the entire staff of MSNBC and probably all of CNN are RACISTS. Period.

WTF is a racialist?

They are RACIST hatemongers that make a living, and stay in power, by perpetually fanning the flames of racial hatred.

Why coin some new term that sets them apart from earlier Democrats that set up and ran the KKK for a century? Racism is racism. The only thing that's changed is which race the Democrats pander to, and inflame with hatred, to maintain themselves in power.

All of this is a direct result of Obama/Holder's failure to provoke Patriots/Veteran/Tea Party to violence. So now they are going to provoke the animals within their own ranks to justify the martial law they need to physically disarm America.

I firmly believe that a calamity of Biblical proportions is coming. War, economic collapse, CME, or natural who knows, but I think they know it too and are working ahead of time to make some animals more equal

QUOTE: "Unless they are stopped and soon, the communists running this administration will make the next two years horrendous." UNQUOTE Unless they are stopped soon? I say it's HIGH TIME to EXPOSE them all and who they are...!!! Then the emperor will have NO clothes. It's time the American people do their own research, take the reigns and ROUTE THEM OUT. Here's the major start http://www.biblebelievers.org.au/przion1.htm AS THE FAITH OF A NATION GOES SO GOES THE NATION...!!! TIME FOR THE AWAKENING, TIME TO START THE ROUNDUP...!!!