CHQ Chairman Richard A. Viguerie has been calling for the replacement of GOP Speaker of the House John Boehner arguing that Boehner’s not a conservative and that his regular failures of leadership disqualify him from heading the largest House Republican majority since 1928. 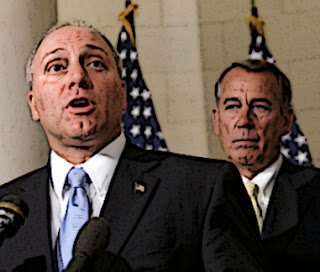 Mr. Viguerie’s calls for Boehner’s replacement have been regularly ignored by the establishment media who cover Capitol Hill and share Boehner’s love of Big Government.

Fox News personality and influential talk radio host Sean Hannity is calling on every Republican member of the House of Representatives to reconsider whether Boehner is in fact an effective leader.

Hannity, like Viguerie, said that if Republicans return to conservative principles by rejecting Boehner and installing a replacement, they will be rewarded with political victories in 2016’s crucial presidential election.

“Every Republican member needs to ask themselves if John Boehner is really the best person to lead the conservative movement at this important time in history,” Hannity told Matt Boyle of Breitbart News. “Are they voting for him as a leader or for the Committee assignments they have been promised? The American people expect and deserve bold and dynamic and inspiring leaders. The next 2 years are critical for the country.”

“GOP establishment a disastrous mess. Clean them out. Time for new leaders with conservative principles,” Levin said on Facebook about the Scalise scandal, adding that: “You RINOs need to do a much better job of vetting your leaders & candidates. After all, you’re the pros, right?”

According to an exclusive article by Matt Boyle, Levin also said that Boehner is backing Scalise up a hundred percent because Scalise was involved in purging conservatives who were in the way of Boehner’s big government initiatives during his time as the chairman of the Republican Study Committee.

“Boehner is all in for Scalise, and here’s why,” Levin said with a link to a previous posting on his website about Scalise’s role in helping Boehner eliminate conservative opposition via the RSC to his big government initiatives.

In our view John Boehner’s continuous leadership failures, his trashing of conservatives as “knuckle draggers” and his regular attacks on conservative voters and their chosen Representatives in Congress long ago disqualified him to lead the House Republican Conference and hold the third highest office in our constitutional republic.

But the Steve Scalise scandal goes beyond our policy disagreements with the Speaker. His support for Steve Scalise shows conservatives, and the rest of America, a man totally corrupted by the lust for power and willing to betray any principle and associate himself with anyone, no matter how despicable their political views, to keep that power.

Scalise, and his enablers John Boehner and Kevin McCarthy must go. We urge you to contact your Representative and demand that he or she oppose John Boehner for Speaker when the House reconvenes in January, the Capitol Switchboard is 1-866-220-0044, make that call today.

Shockingly, it was Slate that did the reporting proving this.

He spoke at an event in the morning that happened to be in the same room later used by the Democrat/KKK group.