GELERNTER: States Can End "Executive Amnesty" Without a Lawsuit

Writing in National Review, Josh Gelernter offers a very different spin on the "nullification" debate. While acknowledging that the judiciary has consistently ruled against the nullification doctrine, insisting only it has the authority to declare laws unconstitutional, Obama's "Executive Amnesty" is something very different from a law.

This week, Tennessee became the 25th state to join a lawsuit against the president’s executive amnesty order. The lawsuit may work, but there’s another, more direct, and considerably more interesting redress against executive overreach [first p]roposed in 1798 by Thomas Jefferson and James Madison. 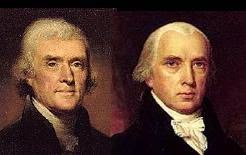 ...The nullification doctrine posits that, as the federal government is the product of the Constitution, and the Constitution is a compact of the states, it’s the states that have the final say on any law’s constitutionality. If a state determines that a law exceeds the terms of the compact to which it agreed, it has the right to nullify that law within its own borders.

Why, you wonder, would that be better than filing a lawsuit? In a certain sense, it wouldn’t — because winning that suit would strike down Mr. Obama’s order in all 50 states. Which is not an unlikely outcome, given the order’s extremely shaky legal footing. However —

The judiciary has consistently ruled against the nullification doctrine, asserting its unique, judicial right to declare laws unconstitutional. But this executive order isn’t a law. And given its extremely shaky legal footing, it isn’t difficult to imagine a federal bench recognizing the states’ right to disregard federal orders that don’t clearly have the force of law. And that would be a tremendous — tremendous — blow against the executive’s assumption of legislative powers.

But in the shorter, directer term: It [nullification] would force the Obama administration to go on offense, suing the states to enforce a law that isn’t a law. And I don’t think that case can be made.

I think this is an intriguing idea. Gelernter notes that your state's governor and attorney general should be contacted, especially if you live in a red or purple state.

Nullification may be a non-starter under normal circumstances, but nullifying non-laws should be anything but controversial.

Conservatives are known for their zeal for and adherence to the Constitution. But they are not known for Constitutional scholarship, however. Democrats have outmaneuvered the GOP for 6 years now and are likely to continue to do so. Moreover, Republicans bought wholesale the fear sold by Rove and company about the government shutdown on the last budget skirmish which, of course, is complete garbage.

After a historical sweep, Republicans just handed the president everything he wanted in the spending bill until June. It is unlikely they will try anything so novel and creative as State nullification.

Anonymous, you are stuck in DC. On the federal level, the GOP has been outmaneuvered by the Dems, and they seem determined to maintain the status quo. This why conservatives, who have been outmaneuvering Dems on the state level, are seeking red state governments who will exercise their Constitutional authority in defiance of the Adjunct Professor. The GOP Congress can watch and take notes if they wish.

Good article, but as rebutted in the above comment, I too have no confidence in these timid republicans, these traitors and liars to their electorate, these elected democrats that call themselves republican as they scurry to nominate Jeb Bush. That is number one on the agenda