And I mean "love" in a strictly platonic, ultra-masculine kind of way, of course.

Alexander Bolton of The Hill whines that Cruz is the center of the Senate's budget meltdown: 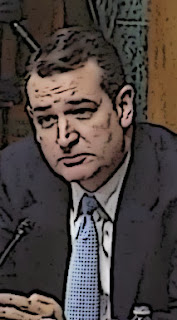 Sen. Ted Cruz, the firebrand conservative freshman from Texas, has blown up the Senate leadership’s plans to have a peaceful weekend by forcing round-the-clock votes on President Obama’s nominees and the $1.1 trillion omnibus.

“Even though millions of voters rose up just one month ago to protest how President Obama and the Senate Democrats were running Washington, business as usual is continuing inside the marble halls of the United State Congress,” Cruz said in a fiery floor speech.

Because of objections from Cruz and his ally Sen. Mike Lee (R-Utah), the Senate will begin slogging through procedural votes on nominees starting at noon Saturday and vote to end a filibuster of the omnibus spending package at 1 a.m. Sunday morning...

...Cruz will force colleagues to vote Sunday on a point-of-order procedural objection that he is raising to the spending bill to protest Obama’s immigration order.

“This procedural tool will ensure that every Senator will be on record regarding the constitutionality of President Obama's illegal amnesty,” said Cruz’s spokeswoman Catherine Frazier... Cruz questioned whether McConnell and Boehner are fully committed to battling Obama on immigration.

“I would note that a whole lot of citizens across the country feel a little bit like Charlie Brown with Lucy and the football, wherein fight after fight leadership in Congress says, we’ll fight next time — not this time, no, no, no. The wise thing to do is to fight in a month, fight in two months,” he said on the Senate floor... “This bill is not designed to help working Americans. It is designed to pay off all the promises made to lobbyists who funded campaigns over the past year,” Cruz said in his lengthy floor statement... Before the United States Senate is a bill that does nothing, absolutely nothing to stop President Obama’s illegal and unconstitutional amnesty,” he said.

In an era of Oligarchs and partisan mush, Cruz is a beacon of hope. The Framers would be proud.

We need a Constitutional conservative with some testicular fortitude in the White House in 2016. I see only three viable contenders at the moment: Ted Cruz, Mike Lee, or Scott Walker. I could support any one of the three -- with gusto.

Cruz, Lee, Gohmert, Jeff Sessions, and a handfull of others are the only politicians on "the Hill" that care about Americans and the middle class. The rest of them, especially Boehner, McConnell, can all burn in hell. They are despicable.

I keep posting Walker/Cruz 2016 for a reason.

I love my Senator!


Walker should be a very solid candidate with what he managed to accomplish in Wisconsin. To bad his immigration stance is the same as Jeb Bush.