Yogi Berra, a Master of the English language, once said that something felt like “Déjà vu all over again” (looks more urbane with the accent marks, doesn’t it?). 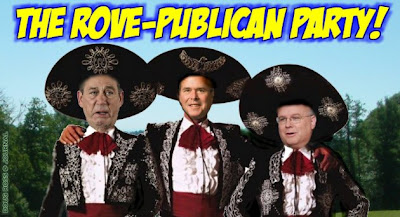 As you gentlemen and ladies well know, Jeb Bush is testing the POTUS waters, with the encouragement of the GOP Establishment’s donor class and the liberal media (e.g., see WaPo, NYT, Politico and HuffPo). Jeb’s doubtless trying to impress same with his abilities to attract financial support.

It was in this context that Deja overcame me, as it does all of us occasionally. Usually dismissed soon as the workings of an errant Higgs slamming against a larger molecule in our brains.

In this case, it may have been simple political plagiarism rather than the mischief of some loose sub-atomic particle.

The National Journal, run by Ron Fournier, the former UP Washington Bureau Chief, who has become strangely critical of Obama after shilling for him for years, told us this:

Bush has signaled, however, that he doesn't plan to pivot rightward in an effort to win the GOP primaries, saying at a recent forum in Washington that a Republican nominee should be willing to ‘lose the primary to win the general.’ That attitude has struck fear into some of the Democratic strategists hoping to guide former Secretary of State Hillary Clinton into the White House. They see the Spanish-speaking Bush, who won two terms in the crucial presidential state of Florida, as a formidable foe who could cut into some crucial Democratic constituencies. In the Facebook post, Bush trotted out something close a slogan saying he hoped to begin a conversation about "restoring the promise of America".

After puzzling for some time over how you lose the primary and still get to win in the general (sort of like, “We are the ones we’ve been waiting for"), I felt the impact of Deja. “Restoring the promise of America?” Haven’t I heard that before?

“Romney called on voters to put the ‘disappointment’ and the ‘divisiveness’ of the last four years behind them, and ‘turn the page’ with him. ‘This president can ask us to be patient. This president can tell us it was someone else’s fault. … But this president cannot tell us that you’re better off today than when he took office,’ Romney said. ‘Now is the time to restore the promise of America.’”

So, the Jebster's first effort at coining a political “slogan” is to claim, for his own, the words of Mitt Romney.

I love the smell of losing in the morning.

Just like Hilary, this guy would be parking cars somewhere if it wasn't for having connections.

The media puts these anti constitutional, self indulging imbeciles on pedestals. They serve the leftist media agenda.