Election 2016: Former Florida Gov. Jeb Bush embraces one-size-fits-all national education standards that would turn schools into re-education camps for the left. His decision could cause trouble with GOP primary voters. 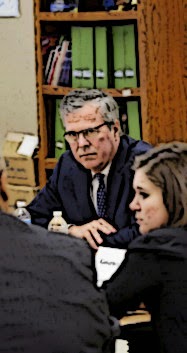 As is the tradition these days, Jeb Bush, brother of one former president and son of another, has announced via social media that he is preparing to run for president, setting the stage for another Bush-Clinton contest in 2016 should former Secretary of State Hillary Clinton get the Democratic nomination.

To be the Republican nominee, Bush must run a gauntlet of primaries where he'll need to persuade Tea Party types and hard-core conservatives to get behind an "establishment" candidate who supports Common Care, a program that former Rep. Allen West has called "the ObamaCare of education."

Common Core is a set of education and learning standards that so far has produced bizarre lesson and learning plans. Some see it as a progressive dream of turning K-12 schools into leftist re-education camps — much as many major universities and colleges already are.

Some five years ago, a majority of states gave up a big chunk of their sovereignty by embracing a set of national teaching and education standards. Because the Common Core State Standards (CCSS) concept originated with a coalition of state governors and the goal of setting a uniform standard for grades K-12 nationwide, the common belief was: What could go wrong?

Since Washington stepped into the picture, Common Core has morphed into a tool to eliminate local control of education. Instead of teaching kids how to read and count, CCSS lesson plans often contain subliminal messages that teach them what to think.

Consider the worksheet that asks students to rewrite sentences to make them "less wordy." Sentences such as "The commands of government officials must be obeyed by all." Presumably, "commands" include executive orders that shred the Constitution.

These worksheets, published by New Jersey-based Pearson Education, ask fifth-graders to edit such sentences as "he (the president) makes sure the laws of the country are fair" and "the wants of an individual are less important than the well-being of the nation."

Political persuasion is not Common Core's only problem. James Milgram, professor emeritus of mathematics at Stanford University, has determined that the Common Core math standards leave U.S. students two grade levels behind their peers internationally by the seventh grade and inadequately prepare them to pursue higher careers in math, science, technology and engineering.

More than a dozen states have made significant efforts to push back against Common Core. Four — Indiana, South Carolina, Louisiana and Oklahoma — have exited the standards completely.

To be fair, Bush supports school vouchers. But if Common Core standards become the national norm, we will have school choice without a real choice.

Bush and his supporters will argue that this was not what the governors intended and that with the right president, these excesses can be reined in. Yet even if this is possible, just what really is the argument for national standards such as Common Core? Or even for a Department of Education that has left us far down the list of nations in educational achievement?

This is the nation that, long before there was a Department of Education and Common Core, graduated students from the proverbial little red schoolhouses who built railroads across the continent, flew the first airplane, invented the assembly line and nuclear weapons, fought and won a global war on two fronts, and sent men to the moon.

We don't need Common Core, and Jeb Bush, if he wants to be president, will have to explain why we do.

"We don't need Common Core, and Jeb Bush, if he wants to be president, will have to explain why we do."

We don't need Common Core, and we do not need anyone who will try to "explain why we do."

What we do need is someone who will explain, as does this mathematician, why we must totally reject it, and anyone who supports it.

But, I have no doubt that Jeb Bush will do exactly as you suggest, and lie to us about it, trying to con us into believing it's a good thing. The socialist MSM will avoid publicizing the facts, thereby giving Bush an air of credibility he does not deserve. And voters choices will be limited to a Democrat liar, and a Republican liar, both of whom they think are telling them the truth.

JB is truly a Democrat in GOP attire. He can't just bring himself to jump the fence while his father is alive. But again, he doesn't have to. The Establishment of both parties have merged to form and indistinguishable cabal if self-interest and corruption. JB is smack in the middle of it. I will never vote in the general election if JB gets within a mile of the nomination.

"JB is smack in the middle of it."

signed,
I Not Robot