ERICKSON: House Conservatives Have the Power to Depose Speaker Boehner and Should Do So in January

Erick Erickson has some sage advice that could transform a handful of House conservatives into living legends in flyover land. 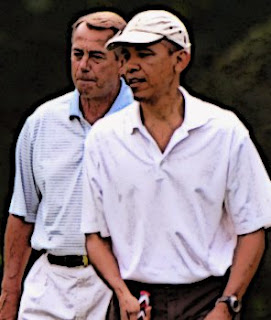 The vote on whether Rep. John Boehner (R-OH) will be Speaker will occur in January, and 30 conservative House members can deny him re-election. It will be an actual public vote—not a behind-the-scenes, paper ballot vote. Although many would have you believe otherwise, Boehner has not yet been elected Speaker for the new term. House Republicans elected him as their nominee for Speaker in November, but the full House of Representatives needs to vote on his nomination in January.

House conservatives must summon the courage to oppose Boehner’s nomination on the floor in January. It is a moral imperative. You cannot consistently complain about Leadership’s many failures—and the treachery involved with a Speaker fresh off a successful wave election conspiring with President Obama to fund amnesty and enjoy a celebratory phone call in the aftermath—and then vote for him to continue in this role. To paraphrase Albert Einstein, that is the definition of insanity, and it is enabled by a vote for Rep. John Boehner.

...Boehner’s team lied to Rep. Marlin Stutzman (R-IN) to get his vote on the all-important procedural “rule” setting up the debate on the cromnibus. He promised to pull the cromnibus if Stutzman voted for the rule. Stutzman gave his vote, and Boehner went back on his word.

Some will argue that a vote against Boehner is a mere protest vote. It is not. There are 30 House conservatives whose vote against Boehner, along with the united front of Democrats voting for Pelosi, could deny him reelection. These 30 would be exercising a veto. There would be no chance of a Democrat becoming Speaker (an obvious point but an argument sure to be advanced by some Republican), because a actual majority of the whole House of Representatives is required. Republicans would simply go back and re-nominate someone else who would not be subsequently vetoed.

Think of it as a Supreme Court nomination that needs to be confirmed by the Senate. When the Senate rejects a President’s nominee, it forces the President to go back to the drawing board and nominate someone new that is acceptable to the Senate. The Republican Conference would do that in this analogy by nominating someone that would not be vetoed by the 30.

This is also why the 30 would not need to be unified on who they wanted to replace Boehner—another common problem in removing Boehner. The conspirators can never agree on who the replacement should be. But if you veto Boehner and throw it back to the conference, with a willingness to stand firm on future bad options, House Republicans will eventually gravitate towards a real conservative who is well liked by many Republicans. It may take some time, but it will be worth it.

Let me speak directly to House conservatives for a moment. Are you are going to be complicit in the ongoing speakership of Rep. John Boehner (R-OH) by giving him your vote? Are you going to waste the best years of your time in Congress being “managed” with distractions and dishonesty? Or will you fight back?

Are there 30 Republicans who are fed up with being lied to by leadership? Who are sick of Boehner's secret deals with lobbyists, Democrats, and the media? Who care more about their constituents than getting invited to the right parties?

Should 30 such Republicans emerge, rest assured that they will transform Beltway politics for the foreseeable future. And they could also set the stage for a stunning conservative victory in 2016.