Chris wins our oh-so-prestigious Comment o' the Day award, which entitles him to either a 2015 Mercedes GLK 350 or a box of Kaboom Cereal (our choice): 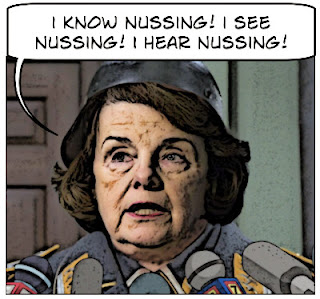 The level of hypocrisy has jammed the meter's needle up against the peg and wrapped it around.

These hyperventilating, panties-in-a-wad harpies (female, male, and ?) are the same slime balls (alternately, slime-without-balls) who were BRIEFED many times on what was planned and done, as well as wondering if there wasn't more that could be done.

These now-incredulous (golly gee, we never would have guessed) geniuses let the dogs off the leash, loudly commanded, "Sic 'em!" and then jumped up and down, pom poms waving, while they gleefully cheered, "Go team, go! Fight, team, fight!"

Now they're collectively on the fainting couch (getting a tad crowded there, it is), ready to throw under the bus those out on the pointy end of the spear who did their expressed bidding.

As they cry out for punishment for the "doers" of all this "evil" and those at the CIA who gave the orders, they conveniently ignore that it was they, themselves, who ordered the CIA to march forward. If the "foot soldiers" just "carrying out orders" are to be indicted, how about the ultimate order-givers? Does Nuremberg ring a bell?

Chris refers to, of course, the fact that Feinstein, Pelosi and the other weasels were fully briefed on the Enhanced Interrogation program. Further, their very "investigation" failed to interview a single member (not one) of the very intelligence community it claimed to review.

I would call these people pond-scum, but that would unfairly tarnish hard-working algae.

It's high time we thought seriously about torture and when it might be morally justified.

Why don't "someone" grow a set of orbs and start a investigation on DiWiFi's husband who has collected BILLIONS in gov't contracts since 2009.