With his "Executive Order on Amnesty", Obama throws Americans workers under the bus 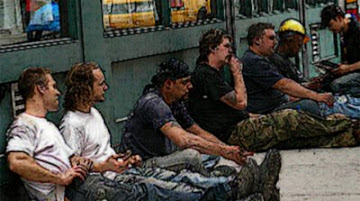 The U.S. Department of Commerce informs us that “today’s typical 18- to 34-year-old earns about $2,000 less per year (adjusted for inflation) than their counterpart in 1980.” That is a sharp and painful wage decline for young Americans. What has happened in the labor market since 1980?

Census Bureau statistics report that in 1980, the foreign-born population stood at 14.1 million.

From 1980 through 2013, the immigrant population tripled from 14 million to more than 41 million.

This large increase in the size of the immigrant population is the direct product of policies in Washington.

Legal immigration during the ’80s averaged around 600,000 a year. But since 1990 through today it has averaged about 1 million annually — meaning the annual rate almost doubled. The sustained large-scale flow of legal immigration, overwhelmingly lower-wage and lower-skilled, has placed substantial downward pressure on wages.

We have, right now, a very slack labor market, with more jobseekers than jobs.

This large-scale immigration flow, paired with the forces of globalization and automation, has made it ever more difficult for American workers to earn a wage that can support a family.

Consider this report just published in the New York Times:

Working, in America, is in decline. The share of prime-age men — those 25 to 54 years old — who are not working has more than tripled since the late 1960s, to 16 percent. More recently, since the turn of the century, the share of women without paying jobs has been rising, too. The United States, which had one of the highest employment rates among developed nations as recently as 2000, has fallen toward the bottom of the list . . .

At the same time, it has become harder for men to find higher-paying jobs. Foreign competition and technological advances have eliminated many of the jobs in which high school graduates . . . once could earn $40 an hour, or more.

Since end of the 1960s — the time frame identified by the article — the share of the U.S. population that is foreign-born has increased from less than 5 percent to more than 13 percent.

As a total number, the size of the foreign-born population has quadrupled over the last four decades.

Due to current Washington policy, these figures are only going to rise.

The Congressional Research Service estimates that the foreign-born population could reach as high as 58 million within a decade based on recent trends. Only an adjustment in policy will change this trajectory — just as policy was changed early in the 20th century to allow labor markets to tighten.

This is an issue that affects all residents, foreign-born and U.S.-born. In fact, among those most affected by the size of these large immigrant flows are the immigrants themselves. By continuing to admit these large numbers over such a sustained period of time, many immigrants themselves are unable to find jobs. For instance, less than half the immigrants who entered California since 2010 are participating in the labor force. In Los Angeles — where 4 in 10 residents is an immigrant — one-third of immigrants recently arrived live in poverty.

We have an obligation to those we lawfully admit not to admit such a large number that their own wages and job prospects are diminished. A sound immigration policy must serve the needs of those already living here.

Immigrants and native-workers are also competing with a large flow of temporary guest workers — individuals brought into the U.S. from abroad for the explicit purpose of taking a job. Each year, the U.S. admits roughly 700,000 guest workers for this purpose. Of those roughly 700,000 guest workers, only about 10 percent are for agricultural work — the other 90 percent take jobs in almost every industry in America, from good-paying construction jobs to coveted positions at technology firms in Silicon Valley.

The pressures on the middle class are great. You have a large flow of permanent immigration and temporary workers, the elimination of many good-paying jobs at factories and plants due to advances in robotics, the shedding of manufacturing jobs due to overseas competition, a sluggish over-regulated economy that is growing too slowly to keep pace with population growth, and the high costs of energy, health care, and household goods.

Policymakers in Washington need to be reducing the burdens on working families, not making life more difficult for them.

Furthermore, as documented by the Center for Immigration Studies, relying exclusively on government data, all net employment gains among the working-age since the year 2000 have gone to immigrant workers. This remarkable trend occurred even as the number of working-age native workers increased by nearly 17 million.

• Real median weekly earnings are lower today than they were in 2000.

It is in this context that we must consider the economic fallout from the president’s unconstitutional executive amnesty. In plain violation of law and the expressed will of the American people, the president has ordered 5 million work permits to be issued to those here illegally — who will now be able to take any job in America.

This illegal amnesty is part of a broader immigration vision from the president. The legislation he endlessly champions — the bill written behind closed doors with billionaire activists and open-border enthusiasts — surges immigration rates yet higher. After four decades of record immigration, the president’s bill, supported unanimously by Senate Democrats, triples the issuance of permanent-residency cards and doubles foreign-guest-worker admissions over the next ten years.

The Center for Immigration Studies explains that this legislation would, in a mere six years from today, increase the percentage of the U.S. population bon abroad to a level never before reached in America history. By 2033, nearly one in six U.S. residents under this plan will be foreign-born.

Unsurprisingly, the nonpartisan Congressional Budget Office projected that the result of this legislation would be lower wages, higher-unemployment, and reduced per-capita GNP.

All of this begs a simple question: Who is looking out for American workers?

Who is looking out for their interests, fighting to help them get better jobs and pay, working to help their communities climb out of poverty?

The immigration debate in our nation’s capital is always centered on the needs of illegal immigrants, foreign workers, or large employers. Isn’t it time, after decades of open immigration, to focus on how we can help Americans?

Is not the sensible and rational thing to do to slow down a bit, allow wages to rise, assimilation to occur, and to help those struggling here today rise into the middle class?

The American people have begged and pleaded for a lawful system of immigration that serves the national interest, not the special interests. But the politicians have refused, refused, refused. This summer alone the White House met 20 times with business executives, amnesty lobbyists, and immigration activists to craft their executive amnesty. You know who wasn’t invited into that room? You, the American citizen. You don’t get a say.

These super-elites in Washington and Wall Street dream of a world without borders, a paradise where things like laws and rules and national boundaries can don’t get in the way of their grand chimera. The only challenge these great global citizens face are these pesky people called voters, who cling to the old-fashioned idea of a nation as a home and a border as something real and worth protecting. These elites, you see, know better. If you’re worried about your jobs or wages, if you’re concerned that the pace of immigration into your community is too fast and too large, if you feel like your needs aren’t being considered, well, you’re just a nativist, you see. You’re being selfish.

So when an election happens, and the people rebel against this open-borders agenda, there is really one thing for these wise elites to do. They must impose their own laws.

How Congress answers this challenge will shape the future of this republic. Will we defend and protect the people who sent us here — their laws, their Constitution, their communities — or we will abandon them? I pose that question to this body, and I suggest there is no purpose to our being here if it is not to serve and protect and defend the loyal people who sent us here on their behalf.