Josh Siegel at the Daily Signal provides us with some transcripts from one of Emperor Obama's rare press conferences. What struck me about Dear Leader's answers is that virtually every significant assertion was a blatant and unconscionable lie. Consider: 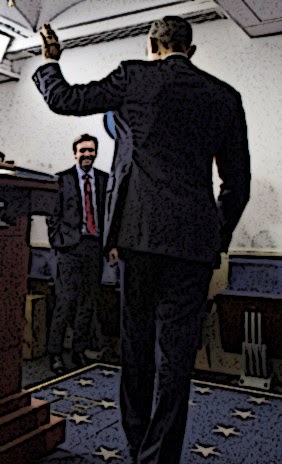 Obama, on Sony’s decision to cancel the release of “The Interview” (the FBI confirmed that North Korea did, in fact, carry out a cyber attack on Sony):

“I am sympathetic to the concerns they faced, but having said that, yes, I think they made a mistake. I wish they had spoken to me first. I would have told them don’t get into a pattern where you’re intimidated by these kinds of criminal attacks.

In fact, Sony CEO Michael Lynton responded on CNN that Czar Obama was full of it: "...the president, the press and the public are mistaken... We do not own movie theaters. We cannot determine whether or not a movie will be played in movie theaters! I don't know exactly whether he understands the sequence of events that led up to the movie not being shown in the movie theaters. Therefore I would disagree with the notion that it was a mistake."

On relations with the new Republican-controlled Congress in 2014:

“I am sincere when I say I want to work with the new Congress to get things done to make sure government is better and smarter. We saw during the lame duck that perhaps a spirit of compromise may be coming to the fore. I take Speaker Boehner and Majority Leader McConnell at their word.”

The truth, as Democrats and Republicans alike admit, is that Obama never works with Congress directly, never compromises, and despises spending any time on the business of government.

So the notion that Obama "wants to work with the new Congress" is as laughable as it is disingenuous.

On his use of executive actions:

“I am energized and excited and I won’t be stopping for a minute in an effort to make life better for ordinary Americans... Where I see a big problem and opportunity to help the American people, and I am within lawful authority to do it, I will do it.”

As federal judges have already ruled -- in strenuous language -- Obama's executive actions are blatantly unconstitutional and unlawful. For example, Judge Arthur J. Schwab, ruling in a deportation case earlier this week, wrote that "President Obama’s unilateral legislative action violates the separation of powers provided for in the United States Constitution as well as the Take Care Clause, and therefore, is unconstitutional."

Liberal law professor Jonathan Turley of Georgetown likewise ripped Obama's executive order as blatantly outside the scope of lawful behavior: "What the President is suggesting is tearing at the very fabric of the constitution... I always tell my friends on the Democratic side, we will rue the day when we helped create this uber presidency. What the Democrats are creating is something very very dangerous."

On the Keystone pipeline (incoming Senate Majority Leader Mitch McConnell has said this will be Congress’ first order of business):

Well paying construction jobs? Like those the Stimulus was supposed to create? As anyone who has graduated from sixth grade could tell you, Keystone would create "thousands of jobs", increase "economic security for the U.S.", and -- unlike Obama's failed "Stimulus" -- is actually "shovel-ready".

On the state of black America:

“Like the rest of America, black America in the aggregate is better off than when I came into office."

Since Obama took office, unemployment, poverty, and dependency on government are all up for vast segments of the black community. And, of course, as even the ludicrously biased Politico admits, race relations have worsened dramatically under Obama.

In short, Obama's ridiculous press conference was a cacophony of lies. It was a symphony of propaganda that perfectly befits the most lawless and most deceptive president in American history.