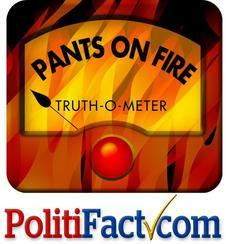 In his new book, Sen. Ted Cruz, R-Texas, calls out “a new, particularly noxious species of yellow journalism that is beginning to infect what passes for modern political discourse. It’s called ‘PolitiFact.’”

We’ve been pointing out those exact problems, and many others, for years now. In fact, among the dozens of articles we’ve done on PolitiFact’s shortcomings, there’s a 14-part series on this exact fight: PolitiFact vs. Cruz.

Now, W. Gardner Selby of PolitiFact Texas has already responded with a glib little column pointing out a slight error in Cruz’s book. Congratulations to Selby. That’s already more substantive than just about any of the attacks on Cruz he’s written.

The final score for our 14-part review was Cruz, 12, PolitiFact, 1; and one disqualification when both sides were wrong.

If you’re interested in how liberal journalists marginalize conservatives by presenting their own opinions as facts, we invite you to check out the series. (We’ll even throw in a few killer, debate-winning facts on gun control and health care that you’ll never read in the paper.)

We could almost say our take is Cruz-approved. His argument about Space Invaders makes the same point we did, and our arguments about President Obama’s apology tour are quite similar. Some of the other strong pieces are Parts 1, 5, 7, 10, 13, and 14.

Part 1: Is the national debt bigger than our gross domestic product?

Part 2: Did Ted Cruz have anything nice to say about Chuck Hagel?

Part 3: Do 40 percent of gun sales pass through a background check loophole?

Part 4: When’s the last time the state cut a penny from the budget?

Part 6: Why won’t PolitiFact admit the true cost of Obamacare?

Part 12: Did Obama do an apology tour?

Part 13: Did Dewhurst call for an income tax?

Part 14: Is Ted Cruz soft on immigration, too?