IF YOU LIKE YOUR 401(k), YOU CAN KEEP YOUR 401(k): Obama Labor Dept. Sets Stage for Nationalizing Retirement Accounts


BUMPED: Not only did the GOPe/Democrat budget bill fund every one of Barack Obama's lawless actions, it also supported the Department of Labor's illegal, Soviet-style takeover of the retirement industry. The 401(k) takeover scheme is opposed by majorities of representatives on both sides of the aisle; and the failure of Paul Ryan to even defund this lawless land-grab speaks volumes about the sellout of America by the Uniparty. Cruz-Trump 2016.

In 2013, in a little-heralded case, the U.S. Court of Appeals for the Seventh Circuit rejected the Obama Labor Department's attempt to punish voluntary retirement plan service providers. The DOL, under the direction of the controversial, radical leftist Tom Perez, had tried to force providers of 401(k), 403(b), IRA, and related services to adopt a massive new set of regulations known as "fiduciary" responsibilities.

The Seventh Circuit slammed the door shut on Labor and the Supreme Court thereafter declined to hear the appeal, which meant that the Obama administration had lost in the highest court in the land.

Of course for the "most transparent administration ever", that step simply meant that the court's opinion was to be rejected and that Obama would use his infamous pen to rule by executive fiat. After all, the ends justify the means, correct?

Furthermore, financial services experts have cautioned that the new rule is "too complicated to [actually] put into practice."


Earlier this month, the Labor Department held public hearings to discuss the input and concerns they have received from industry groups and other stakeholders that will be impacted by the department's proposal to expand the definition of “fiduciary” under ERISA … In the debate over the DOL's proposal — which, as written, [will] create a vast and costly new regulatory regime for independent firms and advisers across the country…

Barack Obama and Tom Perez don't care about all of that. They're on a mission to seize your retirement funds:

Labor Department officials are determined to produce a new standard of fiduciary duty for anyone giving retirement investment advice, once they process concerns raised in thousands of comment letters and four days of hearings on their proposal. 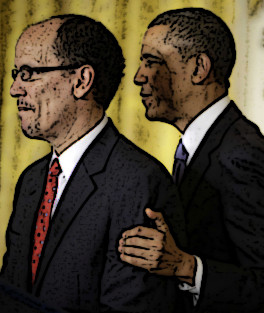 Like Obamacare, the idea is to drive small- and mid-size service providers out of the retirement business by ensuring that the costs of complying with regulations are unaffordable. And, to ensure a Republican president can't easily unwind the Rube Goldberg machinery, the Labor Department has also promised an impossible eight month implementation timeline. Most providers believe it will take three years to follow all of the byzantine rules and regulations.

Their intent, in my view, is to force a consolidation of the retirement service industry, just as Obamacare drove mergers and acquisitions in the health care business, leaving only gigantic corporations in its wake. These companies have become intertwined and dependent upon legislators and lobbyists in Washington. They can't make a move without the permission of the federal leviathan.

Many Democrats are open about the true goal of Obamacare: to end up with a single-payer health care system, modeled after the National Health Service in the U.K. You know, the system that was reported to have killed 120,000 seniors in 2012 alone.

SETTING THEIR SIGHTS ON TRILLIONS OF YOUR RETIREMENT DOLLARS

The Obama administration has its sights set on an incredible amount of your money. By some estimates, Americans are holding well over $10 trillion in private retirement accounts.

For a country with debt that is clearly "unsustainable" (source: the non-partisan Congressional Budget Office), flashing that kind of figure to a Democrat politician is akin to showing a kilo of heroin to a desperate junkie.

One of the first steps the Obama administration took to signal its direction was to unveil its wildly unsuccessful "MyRA" program. This takes participants' funds and invests them in "ultra-safe", government-issued debt.

You can be sure that the future of the retirement services business will be to extend "fiduciary" responsibilities to require advisors to leverage federal debt instruments in their clients' portfolios.

This is called "financial repression", and it is the hallmark of a government on its way to bankruptcy. Essentially, a failing government forces investors to purchase its debt because it knows damn well that the instruments will ultimately never be repaid.

Argentina and other failed countries have embarked upon this strategy prior to a full-blown currency collapse.

You can be sure that the real goal of the Obama administration is to nationalize your retirement account and to invest it in debt that will become increasingly unsellable in the open market.

If you want to maintain control of your retirement funds, I'd recommend contacting your member of Congress today. Urge them to defund the Department of Labor until this rule is nuked from orbit.

I'd suspect what they're really doing is defaulting on their liabilities. By confiscating people's retirement funds; it means that they don't have to pay out on them, because they cannot.

With SS funds gone, pensions upside down, all bonds needing to be rolled over, etc...'using' 401k funds are the obvious next step to keep the can kicking for another 5-10 years. Barry soetoro is just a puppet, voting won't change things, don't get caught up in the left/right paradigm. best course of action is to just not participate in 401k. Stop adding to it, and consider taking some if not all funds out of it.

SS funds aren't gone ... tens of milllions of recipients are still receiving monthly subsidies ... besides, retirees on SS EARNED every single penny of their payouts ... the gov't owns NONE.
Any dipping into these funds is FELONY GRAND THEFT ... since billions ... if not trillions ... is involved. Robbing poverty-stricken retirees of their SS benefits is also premeditated MURDER, whenever even one such retiree dies, because he/she's unable to afford sufficient food, medicines, and heat for their residences in winter.

Eileen you are misinformed. No one has "earned" their SS accounts and the government doesn't owe you nor I SS money. There is no "right" to social security.

In an earlier case, Helvering v. Davis (1937), the Court had ruled that Social Security was not a contributory insurance program, saying, “The proceeds of both the employee and employer taxes are to be paid into the Treasury like any other internal revenue generally, and are not earmarked in any way.”

In other words, Social Security is not an insurance program at all. It is simply a payroll tax on one side and a welfare program on the other. Your Social Security benefits are always subject to the whim of 535 politicians in Washington.

This is basically the same thing they did to independent medical practice, and why you are now seeing a nurse practitioner owned by a gigantic system run by the same university that steals your income via state taxes so they can ruin your kids lives by charging them a ton, putting them in debt, making them unemployable, and subsidizing foreigners and Democrats.

The Government has shown a total lack of self control with money so it is to be expected that they would prey on retirement accounts. Face it, there are only 75 million Boomers in play here and 40 to 50 million will croak quickly without meds. The rest can be humiliated and starved off by 2030, leaving the Country to the clamor of the ignorant, the unemployed and their Progressive Masters.