And the GOPe Beltway insiders wonder why Americans are so pissed?

...Barack Obama is preparing a colossal new executive action that could print-up work permits for a huge number of foreign white-collar graduates every year, above and beyond the levels set by Congress.

This executive action, which directly bypasses Congressional lawmakers, is likely to reverberate across the presidential race, as GOP voters look to choose a nominee they believe will most effectively roll back the President’s still-expanding agenda. And it will certainly raise new security concerns as it covers categories of immigration utilized by migrants from the Middle East and nearby regions.

...The 181-page rule focuses primarily on giving work-permits to foreign college-grads who will compete against Americans for white collar jobs, despite the large number of American graduates now stuck in lower-wage positions and struggling to pay off college debts. The rule will also make each foreign graduate much cheaper for U.S. employers to hire than many U.S.-born college grads. 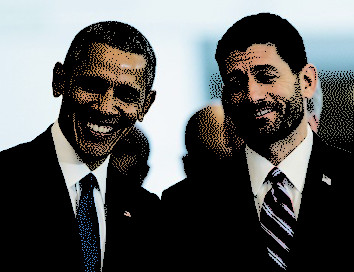 ...Obama’s new 181-page plan to award work-permits to at least 100,000 foreign college-grads also contains a convoluted section that would also sneak work-permits to a huge range of foreign migrants – even after courts have formally ordered their repatriation...

...“Obama is transferring the jobs and salaries of Americans to foreign nationals, including illegal aliens… [who will be] licensed to take middle class jobs,” said one Hill staffer. The pending rule “highlights the unholy alliance between progressive Democrats, progressive Republicans, and the Obama administration… [so] when it comes to finding a job in America, being native-born in America is a disadvantage,” the staffer said.

It is clear that Democrat and Republican leaders have decided to wage economic warfare against Americans, by importing millions of workers, devaluing citizenship and their votes, and effectively wrecking employment opportunities for legal citizens, young and old.

[The] new Department of Homeland Security regulation ... instructs the State Department to give millions of employment authorization documents to aliens prior to authorizing green cards ... The new regulation was designed to override current visa caps outlined in the Immigration and Nationality Act of 1952.

"This is a backdoor plan to circumvent Congress and bust immigration caps, executed during a time of record immigration, lowering wages and eliminating jobs for Americans," an anonymous Senate staffer told the Washington Examiner.

The move comes after a discovery earlier this year that the Obama administration had printed up millions of work permits to issue to people who are in the country illegally.

This latest outrage is but one of many illegal actions taken by Barack Obama in which he directly contravenes federal immigration law:

• In 2012, Obama bypassed laws against illegal immigration by awarding two-year work-permits to at least 800,000 younger foreign migrants who were brought here by their illegal immigrant parents.

• In 2015, the courts blocked his November 2014 amnesty plan to award work-permits to roughly 5 million resident migrants who have U.S.-born children.

• During his entire time in office, Obama also allowed at least 250,000 Central American migrants into the United States by allowing them to claim refugee or asylum status.

• In 2013, Obama added about 2 million extra foreign workers to the economy, while roughly 4 million younger Americans began looking for employment.

Let me guess: the politically defective Senate Majority Leader, the toad-like Mitch McConnell, will gurgle unintelligibly and end up issuing a sternly worded memo to Obama. Speaker of the House Paul Ryan, an advocate of open borders, will claim to be "appalled" by the President's lawless actions, but will end up doing nothing.

Our entire government appears controlled by an "open borders coalition", which has joined La Raza Democrats, who want more Democrat voters, with Chamber of Commerce Republicans, who seek cheaper labor regardless of the long-term impact on the country.

One can only pray that Donald Trump or Ted Cruz -- both staunch enemies of this insanity -- will benefit from this madness. I suspect that the American people will not tolerate this much longer.

Trump 2016
and the Republican party wonders why he will be their leader?

Hey, McConnell, your picture is next to clueless in the dictionary. Literally!

Gov't. has become a criminal enterprise.

The New American Revolution is coming.
The last nail is being hammered into the Progressive coffin.

We are quickly getting to the point where the last peaceful option left to restrain government is an Article V convention of the States to amend the Constitution.

The first order of business of an Article V convention must be to put severe limits on the amount of money government can spend. Spending drives everything else, from taxes to money-creation. While the Fair Tax is also a good idea, until we also have hard limits on spending, nothing will really change.