OUR GREATEST THREAT: Carbon Dioxide Or... Something Else?

If we were aboard a sinking ship, and the captain boldly stated that to prevent submersion we must turn off the air conditioners, burn less oil, and start using squirrelly new-fangled light bulbs, it would be clear that the captain had truly lost his mind. President Obama’s fixation on climate change as the most pressing issue facing the nation whilst experiencing a global conflagration of Islamic extremist terrorism, should be seen no differently.

ISIS, contrary to the president’s assertion, is not “contained,” and is spreading throughout the Middle East, leaving a wake of beheadings, mass executions, and destruction. Terrorists sympathetic to jihad are striking globally, including 130 innocent victims slain in Paris two weeks ago, and now striking on our own soil in San Bernardino this week. Yet the president and his administration continue to appear impotent not only addressing the threats, but even acknowledging them for what they are.

Instead, in conjunction with the Paris Climate Conference this week, administration officials uttered these inanities and non-sequiturs: “Today, there is no greater threat to our planet than climate change.” “No challenge poses a greater threat to future generations than climate change.” “It is indeed one of the biggest threats facing our planet today.” “Climate change is the threat multiplier.” “If another country threatened to wipe out an American town, we’d do everything in our power to protect ourselves. Climate change poses the same threat right now.” 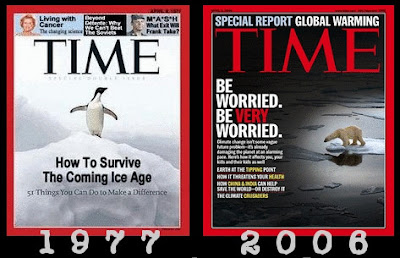 Seemingly doubling down on the idiocy, the president told CBS News, “A deal to cut carbon emissions would be an act of defiance against terror.” Terrorists around the globe, following such a statement by the leader of the free world, are either, a) quaking in their boots fearing the damage to their cause by reduced carbon emissions, or b) laughing hysterically. If one buys into the president’s illogic and biases, it’s the former. For all those not detached from reality, it’s the latter.

And unsurprisingly, the mainstream media parrots the lunacy. CNN reported, “The recent terror attacks are tragic. And many lives will never be the same because of them. They should not be minimized. But climate change is another form of terror and it’s one we’re wreaking on ourselves.” So after the estimated 350 billion tons of CO2 emitted for the confab in Paris, we’re apparently to assume that we’re safer from the threat of global jihad just because they conflated the two dissociated issues. And if we ascribe validity to the president’s premise, all 150 global leaders are now accomplices to global climatic terror by their carbon footprint to Paris.

We have addressed this issue ad nauseam in the past, how the “science” behind purported anthropogenic climate change (aka “global warming,” until the earth quit warming 17 years ago), is not “settled.” The issue is a political one, not a scientific one, as recently averred by a Nobel Prize-winning scientist who has been a supporter of Obama.

Dr. Ivar Giaever, a Norwegian-American physicist who won the Nobel Prize for physics, declared in July, “I would say that basically global warming is a non-problem.” After referencing Obama’s declaration that “no challenge poses a greater threat to future generations than climate change,” Giaever said it was a “ridiculous statement.” He went on to say, “I say this to Obama: Excuse me, Mr. President, but you’re wrong. Dead wrong,”

In 2009, Giaever was one of over 100 scientists who wrote a letter to the president that stated, “We the undersigned scientists, maintain that the case for alarm regarding climate change is grossly overstated.”

Giaever says that the theory behind fears about rising carbon dioxide levels created by man “is not backed by evidence.” He said, “Global warming really has become a new religion. Because you cannot discuss it. It’s not proper.”

Clearly the Nobel Laureate is correct. The political left is wholly sold on the notion that carbon dioxide, the gas we exhale and that plants feed on, causes climate change. And to attempt to reason with them based on the actual evidence and logic, rather than the hyperbolic talking points of those with vested interests, especially those receiving government grants for their confirmation bias, is utterly futile.

The ideological fascism exercised from the left on climate change disallows the possibility of diversity from their preconceived conclusions. Discussions, regardless of logic and data, inexorably devolve to casting aspersions and adolescent name-calling. One is a “flat-earther” if one fails to embrace the highly doctored, exaggerated, and pre-conceived notion of man-made climate change.

Yet interestingly, even among climate scientists, there is no “consensus,” and the “97% agree in man-made climate change” is bogus. The most recent polling of 6550 scientists working in climate related fields including climate physics, climate impact, and mitigation, was conducted by PBL Netherlands Environment Assessment Agency. They found that only 43% agree with the premise that human activity is causal to global warming, or climate change.

Obama’s attempt to conflate terrorism with climate change is entirely specious, and his preoccupation with faux man-made climate change is ideological, not scientific. There is no evidence that governmental intervention and regulation, however well intentioned, can alter climatic trends, for such an assumption is based upon an unsettled and unproven “scientific” premise.

When it comes to facing exogenous and valid threats to the nation, we truly need a reality-based commander in chief, not an ideology-based meteorologist in chief.

Do you realise that 195 governments are mow moving forward, regardless of what you think?
Btw, Giaever is what's called a 'false expert', so why are you relying on the opinion of a non-experts?

Yeah! it's not surprising as he's using hyperbole to dismiss scientific evidence