By now, only six people in the United States are unaware of the Washington Post's latest clowntastic screwup, in which a "political" "cartoonist" named Ann Talnaes depicted Senator Ted Cruz's five- and seven-year old daughters as monkeys.

Which other ethnic/racial backgrounds does @AnnTelnaes believe suitable for depiction as monkeys (@tedCruz aside)? pic.twitter.com/PEnlBCH631

But T. Becket Adams had the best response:

.@AnnTelnaes You know what to do. Break out those pencils and pens and get to it. pic.twitter.com/gvpFDQIUtL

But to get a more complete picture of Ms. Talnaes' moral depravity, please consider this particular abomination created shortly after the 9/11 attacks. 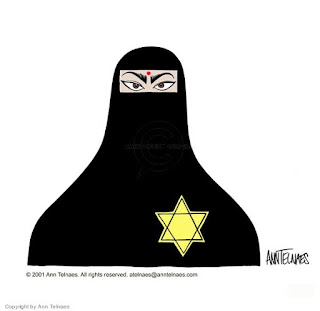 That's right: the real victims of 9/11 weren't 3,000 American innocents -- just the unknowable multitudes of American Muslims that have fallen silently to the microaggression known as Islamophobia.

Seems like a better idea for a cartoon: Hillary and her lapdogs. pic.twitter.com/dou9c7fS4U

Imagine the howling if O's two girls were to be drawn as monkeys.

I agree with Anonymous above. If Obama's sourpuss faced kids were depicted as little prop monkeys, all hello would break loose. But, since it's a conservative Republican, it's fair game?????? NO IT ISN'T. It's low class idiots like this creep who will drive Cruz's numbers even higher. These people just don't get it. Believe it or not, Ms. Tala-whatever your name is - there ARE people in this country who appreciate civility, integrity and those that take the high road. You are not one of them. You are low class trash.

The FOMs over at Michelle Obama's Mirror have been having this discussion for years regarding the Obama girls. The general consensus seems to be that if their parents bring them into the political arena, as Obama and Cruz have done, they're fair game.