While members of House Freedom Caucus are giving Rep. Paul Ryan (R-WI) a public pass on the omnibus, populist thought leader Sen. Jeff Sessions (R-AL) is weighing in strongly. Sessions, the Chairman of the Subcommittee on Immigration and the National Interest, chided Ryan for making publicly false statements about the contents of the legislation— quoting from Ryan’s declarations during a Thursday appearance on Michael Medved’s radio show.


During the radio interview, Ryan dismissed what he described as the “hysteria” surrounding an immigration expansion tucked 700 pages into Ryan’s spending bill:

The H-2B worker provision in here … it’s like 8,000 temporary workers for one year, is all this provision provides. …[B]ut I think there are those who for various reasons are trying to make a mountain out of a molehill, making an issue something that it isn’t.

Sessions challenged Ryan over his claim that pro-worker advocates were making “a mountain out of molehill.” Sessions riposted: 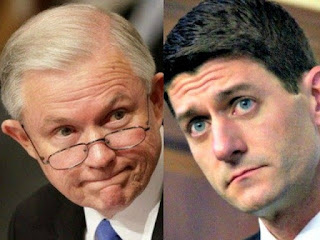 Secondly, it is not ‘making a mountain out of molehill,’ to try to save the jobs and livelihoods of thousands of loyal Americans from this influx of low-wage foreign labor.

Sessions warned Ryan of the dangers of continuing to defy the conservative electorate:

The House’s inclusion of the H-2B increase underscores that the growing divide between voters and party elites is not simply over means, but ends. Blithely dismissing the just concerns of the great majority of American voters, and especially Republican voters, is not a wise course for the Republican Speaker.

According to Pew, 92% of the GOP electorate would like to see future immigration growth reduced–not increased. Kelly Anne Conway’s The Polling Company found that a majority of voters would like to see an immigration pause–similar to what was enacted during the mid-20th century to allow middle class wages to rise and immigrants already in the country to assimilate.

Sessions went on to lay out what the GOP-led Congress would have to do if it wished to claim that it represented Americans, saying, “Congress should defend the citizens of this country with the same passion as the President defends the citizens of other countries.”

Earlier in the week, Sessions said, “The voters put Republicans in a majority in the 2014 midterm elections — a vote which constituted a clear decision to reject the abuse of our immigration system. That loyalty has been repaid with betrayal.”

In an exclusive interview with Breitbart News, conservative icon Phyllis Schlafly described Jeff Sessions as “the best guy in Congress.”

Today Rush Limbaugh said, ” Jeff Sessions is really the only guy standing up and complaining about it [Ryan’s omnibus], warning before it happened, trying to alert people what’s on the verge of happening. Is Sessions the only conservative left in Congress?”

Ryan is a traitor. He must be voted out by Wisconsin voters next year. His betrayal is beyond mere words. He is nothing more than a liar and a turncoat.

Please good people of Wisconsin - VOTE RYAN out like they did Eric Cantor in Virginia for his betrayals. Find a good, sound, principled conservative candidate like Virginia did with Dave Brat, to primary Ryan and GET RID OF HIM. Get him OUT of our lives.

This is exactly why they wanted Ryan in so badly. He is just another #GOP establishment tool/fool.

I'd agree with another poster who would like to see the Republican party abandoned and burned in favor of a third party. After this, can we trust any of them, except (cough) The Donald? Every one of the Republicans who is maneuvering for the nomination has been shucking and jiving for some form of the status quo.
On the Titanic some jumped, some made it to the lifeboats, some stayed out of duty, and some chose to sing with the band. Paul Ryan might liken himself to Wallace Hartley, but hiding under the canvas of a lifeboat must have consequences.