Obama and the Democrats’ War on Black America

It may appear to Black Americans that Barack Obama is in their corner, but it’s a cunning deception. His presidency has had a truly malevolent effect on the Black community—by design. The sole evidence that the White House has any interest whatever in Black America has been an unending stream of rhetoric alleging racism by police against Blacks. Such a campaign can only spawn more resistance to police in encounters between Blacks and cops. And since crime is far more prevalent in Black neighborhoods, those encounters are inevitable.

An ancillary Obama campaign makes constant reference to Jim Crow seeping out of every crevice in our society. In an interview with comedian Marc Maron, he actually driveled this out, after admitting that “race relations have improved significantly during my lifetime.”:

“The legacy of slavery, Jim Crow, discrimination in almost every institution of our lives, that casts a long shadow and that’s still part of our DNA that’s passed on.” He’s made numerous other statements in that vein. 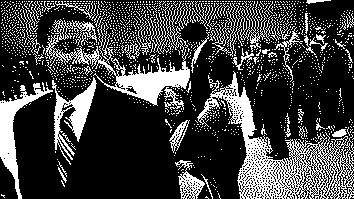 Let’s face it: that’s like having Al Sharpton for a president. Except Obama can read a teleprompter better.

The results of the president’s efforts is division of the races to a degree unseen since the 1960s. Certainly, it’s difficult to see how Blacks have benefitted from any of this.

Of course, this repeated commentary from a president, particularly a Black president, is sure to generate Black resentment. And that’s clearly the intent. Indeed, that conclusion is so obvious, it’s a conundrum why there hasn’t been an outcry against this bizarre rhetoric from a president.

Maybe there would be, if people were more aware that turning one group against another is a common tactic preceding Communist takeovers. The highly charged notions he pushes are obvious agitprop: “the System is rigged against you, if you’re Black”; “Racism is in the DNA of whites.” “Cops are out to kill you.”

That’s the sum total of what Obama has done to help Blacks. Now for what he’s done to harm them.

Black households have fared poorly, under The One: their income between June, 2009 and June, 2014 dropped by 7.7% compared with 2.6%, for white households. And Black net worth has declined 20% during Obama’s tenure.

Obama has made its his central domestic mission to legalize the presence of unlawful aliens—including the right to work—and to give out work permits to those not entitled to have them.

In 2012, he unconstitutionally deferred deportation of 1.5 million illegal aliens, who had been brought here as children before June 15, 2007 (DACA), and gave them the right to work. They had to be younger than 31, on June 15, 2012.—Pew Research

In December of 2014, he legalized some 3.5 million more illegals under DAPA, and also expanded DACA: now they could have been brought here before 2010, with no limit on present age. That added 300,000 eligibles to DACA.—Pew [Note: the changes in this paragraph are on hold, under temporary injunction issued by a federal court on February 16th, pursuant to a lawsuit brought by 26 states.]


That’s a total of 1.5 million people Black Americans must compete with for jobs, so far. If the lawsuit against the Obama amnesty ultimately fails, add in 3.8 million.

Jessica Vaughan, director of policy studies at the Center for Immigration Studies (CIS) reported that the Obama administration gave out millions of work permits to illegal aliens and other aliens not legally entitled to have them, between 2009 and 2014.

2,243,721 permits were given to “illegal, unqualified or ineligible aliens unqualiﬁed for admission.”

“Inexplicably,” says Ms. Vaughan, “2,860 work permits were issued to aliens who were denied asylum, were suspected of using fraudulent documents, were stowaways, or were refused at a port of entry.”

“A huge number of work permits, 1.9 million, were issued to aliens whose status was unknown, not recorded by the adjudicator, or not disclosed by USCIS.

That comes to 3,643,721 illegal work permits given out, and maybe 1.9 million more, whose status was unknown or undisclosed.

So, since the very beginning of his term as president, Obama carried out an agenda to give out an enormous number of work permits to anyone who could walk, creep or stumble across the border. What could possibly be the motive? Did he feel sorry for tourists and foreign students, and so allowed them to work, while they were here? Or was it to hurt our most vulnerable citizens: Black Americans?

In a recent report, Pew Research said that 87% of illegals working are employed in unskilled occupations: service, construction, production, installation and repair, transportation—the very type of jobs Black Americans would be seeking.

But we haven’t touched on the millions of illegal aliens who work without permits; they’re allowed to stay, under Obama’s ever-diminishing enforcement policies. (See Sen. Sessions’s comprehensive “Timeline: How the Obama Administration Bypassed Congress to Dismantle Immigration Enforcement.”)

How many jobs do illegal aliens steal from Americans? According to the Federation for American Immigration Reform (FAIR), it is about 8.5 million jobs. This is based upon an estimate of 11.9 million illegals present in this country.

Here’s an illustration of Democrats’ abnormal psychology and how their illegal immigration policies devastate Black Americans on the local level. Baltimore’s Democratic Mayor Stephanie Rawlings-Blake signed an executive order in 2012 prohibiting all city employees from asking residents about their immigration status. She even set up Spanish-language classes for illegal immigrants, at city expense.

Her reason can only be termed “demented, with a purpose”: she wanted to increase the city’s population. Baltimore’s population had been plummeting for decades, which doesn’t say much for Democratic governance. Census takers—for some screwball reason—do not ask the immigration status of those they count. So, by increasing its population, a state can increase its share of some $400 billion in federal grants to the states.

It can also increase its number of representatives in the House and electors in the Electoral College: Census data is used to reapportion both, after every census.

Baltimore was an illegal alien–magnet even before the mayor made it a sanctuary city: during the years from 2007–2012, the national illegal immigration population dropped, due to the recession. But in Maryland, it increased: “The estimated number of unauthorized immigrants grew to 250,000 in 2012, compared with 220,000 in 2007,” declared Pew Research.

This can be attributed to Maryland being a very illegal alien–friendly state, issuing them driver’s licenses without requiring proof they’re in the country legally, and giving in-state tuition to illegals.

There’s a little-known penalty for that, by the way, under federal law. According to the Heritage Foundation:

“Federal law prohibits state colleges and universities from providing in-state tuition rates to illegal aliens ‘on the basis of residence within the State’—unless the same in-state rates are offered to all citizens of the United States.”

The population trick is a cunning way to bring in money to the state, while increasing its representation. But there’s a price. FAIR estimates that illegal immigrants cost Maryland “$1.9 billion in taxes because of the presence of an estimated 295,000 illegal aliens.” In-state tuition for illegal aliens adds another $28 million.

FAIR notes that: “Illegal aliens pay relatively little in taxes, mainly because of their low earnings. We estimate that the state receives approximately $119 million in tax collections from illegal aliens — only a fraction of the cost of illegal immigration borne by the taxpayers.” But it does help keep the state blue.

However, the highest price is paid by Baltimore’s Black citizens: CNN reports that “For young Black men between the ages of 20 and 24, the unemployment rate was an astounding 37% in 2013.

FAIR estimates that, of the 8.5 million jobs taken by illegals nationally, Maryland’s share is 211,335.

Baltimore is only one sanctuary city; there are 340 in all; CIS maintains an interactive map of them.

It’s difficult for any rational person to comprehend why the Democratic Party would be so supportive of illegal immigration, when it depends heavily upon getting the Black vote. Democrats could at least keep illegals from working and thereby earn the Black vote honestly. But they apparently prefer to keep Black votes by fostering division, while also keeping the lawless immigration policy that costs the Nation $113 billion a year.

Then there’s the unquestionable damage done to America by the millions who can never be assimilated. NumbersUSA estimates Obama’s latest amnesty of 4 million will “draw $2 trillion over their lifetimes in taxpayer-funded government services,” if it is not stopped in the courts.

The first Democratic debate left no doubt that their party is essentially Socialist and is out to overthrow capitalism. In that context all of this madness is not madness: it’s a mission.

A big part of that mission is the war on American Blacks; it is calculated to make Black Americans, already inflamed from the agitprop of racism and abuse from police, financially desperate as well, so Obama can blame it on the rich. Since Dems don’t have an abused peasantry to agitate —as Russia’s Bolsheviks had in 1917—why not create one?

Obama's people and the guy himself simply don't like Americans much.Another example is the new drone rules.Children will have to register their toy drone with the government,while illegals and supposed refuges from war will enter the country freely and be given the money and opportunity to skit any law that might impede their movement and activities.Included are the Jihadis who get 'lost' in the country immediate after lackluster screening.So who will injure more in the black community,race baiters from this administration or the Jihadis who will hide in their communities?Look to the past as an indicator.Who has caused planes to crash?Children with toy drones or radicalized refuges?