Taxpayers will have to fork over another $588 million property-tax hike to be phased in over the next four years.

Some businesses and taxpayers will simply flee, joining what now is best viewed as the "Great Illinois Exodus".

Someone always benefits from these tax-and-spend schemes. Who is it?

The Illinois Policy Institute has the answer in Meet the politicians who stand to get rich off of Chicago’s massive property-tax hike. 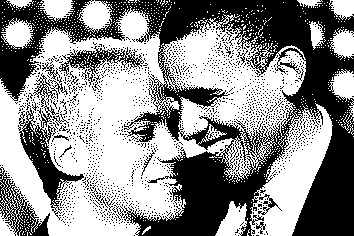 As the tax hikes hit Chicago families and businesses, a who’s who of the state’s political machine will continue to line their pockets off of a property-tax game in which their connections are priced at a premium.

Illinois House Speaker Mike Madigan and Chicago Alderman Ed Burke both run law firms specializing in the lucrative field of Cook County property-tax appeals, one of the most inefficient, corrupt systems in urban politics. Illinois Senate President John Cullerton is a member of a large law firm that handles a range of issues, including property-tax law. The three have held political office in Illinois for a combined 126 years.

The property-tax-assessment process in Cook County is convoluted by design. But here’s how it works in simple terms:

First, the Cook County Assessor’s Office assesses the value of every property in the county. The value of any given property is reassessed once every three years. This “assessed value” is then used to calculate the property taxes owed by each property owner.

Property owners can then appeal that assessed value in a number of ways. They can file a request with the assessor asking for a reduction, appeal the valuation to the Cook County Board of Review, file a lawsuit in which a judge will decide the value, or the property owner and the Cook County State’s Attorney will enter into a settlement agreement over the value.

Flawed property valuations and the process required to fix them are a cash cow for law firms, including those of Madigan, Burke and Cullerton, which know what strings to pull. These law firms handle the ways in which the assessed value of a property is appealed: the request with the assessor, the appeal to the Cook County Board of Review, and lawsuits.

What doesn’t add up is nearly two-thirds of those appeals were successful: an astonishing number that reveals a faulty assessment process ripe for savvy attorneys.

Every year from 2010 to 2014, Cook County Assessor and Democratic Party Chairman Joseph Berrios declared the building that housed Mesirow was worth at least $330 million. In each of those years, Madigan’s law firm successfully contested that valuation to the tune of $5 million in tax breaks annually, according to Novak’s research.

That’s the game in a nutshell.

The losers are the businesses and taxpayers in Illinois.

In increasing numbers, residents and businesses have voted with their feet as noted in Get Me the Hell Out of Here.

The feet voting doesn't seem to be happening often, fast, or deep enough to be making any real difference. Further, many of these states, it seems, are then bolstered by the fed, one way or another, and keep keeping on. Cali is being bolstered by that artificial wave of fed induced stock purchases... no where else to put that easy blood money... or at least one of the obvious top few choices.

When this blows though, it is really going to blow. NY, Cali, Ill, and some others are either going to have to put up a border fence, to keep people in, and call out the reserves, or they aren't going to have anyone left but people they really don't want to be stuck with. Or... it's all bull. And nothing will happen. I know where I am placing my bet. I'm just hoping it sticks more with those few states, though I am pretty sure, at this point, that it's everywhere. Is is more like Noah's flood, or will there be areas washed out and areas just lost for a season or two, though?

I'd love to know more about the investigative process on this kind of graft.Are tips and behind the scenes information the main sources,or is it a public records search that gives up the information to be put together.I'm prety sure several of the eastern Virginia cities have a similar graft game in place,but don't know where to start.The local newspaper is peculiarly incurious about such things,also.

And the States AG is Mike Madigans Daughter so they all get away with it. Until the Madigan family is put in Jail the State of IL is screwed

You'd think the fact that Madigan gets paid to both raise the taxes and to fight to lower them would be a a conflict of interest---he's the one standing to profit the most by the higher tax. I'll bet the mother chuckles in his sleep.

Governor Rauner should go after him on this basis. Maybe he has to go through all the bullshit motions first in order to get the Feds to open an investigation of the matter. I sure hope so.

But who, in the government, can you turn to to get justice anymore? Is anyone who's honorable left?