MISUNDERSTANDERERS OF ISLAM: Israel Will Be A “Graveyard” For Jews

Abu Bakr al-Baghdadi, the leader of ISIS, threatened to invade Israel and massacre Jews, The Times of Israel reported on Saturday.

ISIS forces are “coming closer” and will “soon meet [the Jews] in Palestine,” al-Baghdadi declared in an audio recording released online. “Israel will pay a heavy price at the hands of our fighters.”

“You will never find comfort in Palestine, Jews,” the ISIS leader continued, according to Ynet. “Palestine will not be your land or your home, but it will be a graveyard for you.”

In October, ISIS released a video of an unidentified terrorist threatening Israel and asking in fluent Hebrew, “What will happen to you when tens of thousands [of Muslim fighters] arrive from across the world to slaughter you?”

This past summer, an IDF major general said that Hamas, the terrorist group that rules the Gaza Strip, was aiding ISIS’s affiliate in the Sinai Peninsula. Shadi al-Manei, the leader of ISIS in the Sinai, recently met with Hamas leaders in Gaza to discuss ways that the groups can increase cooperation and coordinate attacks. Two weeks ago, reports surfaced that Hamas is providing extensive financial support to the Sinai-based terrorists. 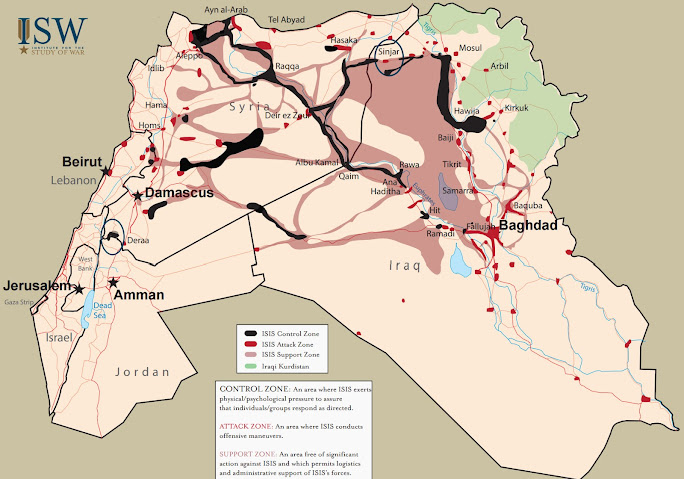 Also in October, French philosopher Bernard-Henri Levy observed that the spike in Palestinian terrorist attacks against Israeli civilians resembled “the latest installment of a worldwide jihad” inspired by ISIS. Earlier this month, during a talk in New York, Levy added:

Daily stabbings are a form, or cousin, of beheadings. Beheading without the big weapon. Beheading with the weapon you find. But it is the same thing. Those who stab in Tel Aviv have seen, definitely, the propaganda of ISIS, praising beheading, raising the spilling of blood of Jews because they are Jews. And they have read how the propaganda of ISIS declares a total war on the spirit of cities. And Tel Aviv is like New York, like Paris.

Obama tells us it's cool, he has this ISIS thing under control,
they are not a threat, we can go to the mall without worry...
but it must feel a lot different when you go to the mall and
have to step over dimly visible blood stains on the sidewalk
every few blocks. No one wants to listen to clowns, but the
clowns with knives seem more believable than our well groomed
President. Pennywise > Creasepants

The jokes on you. The Lord God has brought his people back to Israel in fulfillment of his covenant with Israel. Jesus Christ will come again in glory to save his people and all of Israel will shout Hosanna.

As much as Americans find the violence perpetrated by these urine drinking, goat humping, Muslim flecks repulsive, I'd bet many of them would like to see Abu get his grizzly due the same way Abu Nidal committed suicide by shooting himself 3 times.

The coming together of 10s of 1,000s of these inbreds only makes it easier to kill them. No one kills like white people kill once we start killing.
MM