Some of the key takeaways from polling in the critical states of New Hampshire, South Carolina and Florida:

• "Cruz and Trump are tied at 27 percent. Rubio and Ben Carson roughly tied at 12 percent and 11 percent each, respectively. Bush had 7 percent support; 5 percent backed other candidates and 11 percent were undecided." 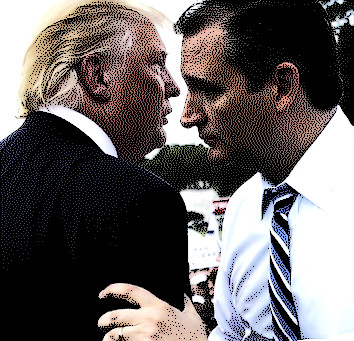 • "Trump leads with 24 percent, followed by Cruz at 16 percent, Rubio at 14 percent, Chris Christie at 13 percent and Bush at 9 percent. The other candidates pull a combined 13 percent of the vote and 11 percent are undecided."

• "Trump leads with 29 percent (4 percentage-point loss since AIF’s August Florida poll); followed by Cruz 18, who gained the most since August, 15 percentage points. Rubio is essentially tied with him at 17 percent (a gain of 10 points), followed by Bush at 10 percent (a loss of 3 points)."

On the Non-Existent Chris Christie "Surge":

Caputo notes that the New Jersey governor appears to be a northeast regional candidate -- who has spent most of his time campaigning in [New Hampshire] -- because he is hovering well under 5% in both Florida and South Carolina.

A Paradox for the GOPe

And then there's this:

For Florida Republicans, the poll has a measure of bitter irony because it shows that Bush, whose political network fostered Rubio and helped his political career right through his 2010 Senate race, could be costing Rubio a shot at the GOP nomination by virtue of staying in the race and syphoning votes from the senator...

...Rather than “dominating the Republican field” as Trump and news media reports state, Tyson wrote that the candidate’s frontrunner status “is mostly a result of simple mathematics rather than his prowess as a candidate. After all, any candidate who is backed by 25% of a likely electorate will look ‘dominant’ when ~65% of that electorate is split 12 ways and another ~10% remain undecided.”

...The focus group also drove home the sense of “profound alienation” between Republicans, their party and “elected leaders at virtually all levels of government,” the memo said.

The summary of the focus group testing indicated that those candidates who most resonate with the electorate's deep unhappiness with the GOP establishment -- i.e., Ted Cruz and Donald Trump -- will have the "best starting positions as the 2016 primaries begin."

Our paradox for the last Oh, 20 years is why we supported a party that didn't listen to us.
We have solved that paradox by striking you from the equation, RINO's.
.
Now it's your turn, do You ........
.
Support the voters choice?
.
Or face their righteous indignation in November for selling out what few principles you may at one time have had.
.
Even with increasing support you not only didn't deliver on your promises, you actively enabled, and aided a lawless executive by failing to exercise the powers given exclusively to you by the Constitution.
.
We've made our choice.
And we're going RINO hunting,
NO BAG LIMITS, NO LISC. REQUIRED.