Janet Yellen increased interest rates for the first time in nine years this week. She isn’t raising them because the economy is strengthening. The economy just happens to be weakening rapidly, as global recession takes hold. The stock market is 3% lower than it was in December 2014, and has basically done nothing since the end of QE3. Wall Street is throwing a hissy fit to try and stop Janet from boosting rates by an inconsequential .25%. Janet would prefer not to raise rates, but the credibility and reputation of her bubble blowing machine is at stake. The Fed has enriched their Wall Street benefactors over the last six years, while destroying the real economy and the middle class.

The quarter point increase will be reversed in short order as soon as we experience market collapse part two. It will be followed with negative interest rates and QE4, as these academics have only one play in their playbook – print money. They created the last financial crisis and have set the stage for the next – even bigger collapse. John Hussman explains how their zero interest rate policy has driven speculators into junk bonds as the only place to get any yield.

Over the past several years, yield-seeking investors, starved for any “pickup” in yield over Treasury securities, have piled into the junk debt and leveraged loan markets. Just as equity valuations have been driven to the second most extreme point in history (and the single most extreme point in history for the median stock, where valuations are well-beyond 2000 levels), risk premiums on speculative debt were compressed to razor-thin levels. By 2014, the spread between junk bond yields and Treasury yields had fallen to less than 2.4%. Since then, years of expected “risk-premiums” have been erased by capital losses, and defaults haven’t even spiked yet (they do so with a lag).

Years of excessive risk taking, spurred by the reckless Fed policy convinced Wall Street to issue billions in junk bonds, just as ridiculously low rates from 2001 through 2005 spurred billions of subprime mortgage issuance. Wall Street has no care about clients, investors, or the impact on the economy. They care about fee generation and dumping their toxic sludge on someone else. The junk bond market is imploding and any muppet who has been lured in during the last two years is getting slaughtered. 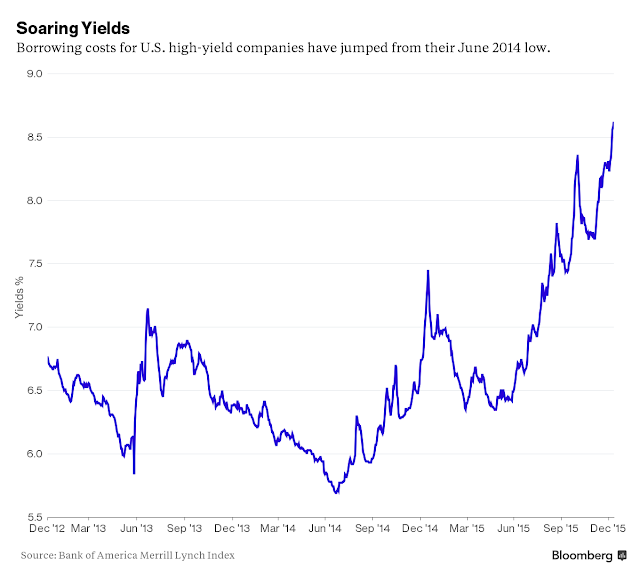 The entire shale scam was funded with easy money and junk bonds. The dozens of companies who issued billions in junk bonds weren’t profitable at $80 oil. They are plunging towards bankruptcy at $36 oil. The amount of mal-investment created by the Federal Reserve over the last six years is almost incomprehensible. The tremors in the junk bond market portend another Lehman moment in the near future.

From an economic standpoint, the unfortunate fact is that the proceeds from aggressive issuance of junk debt and leveraged loans in the past few years were channeled into speculation. Excess capacity in energy production was expanded at the cyclical peak in oil prices, and heavy stock buybacks were executed at obscene equity valuations. The end result will be unintended wealth transfers and deadweight losses for the economy. Since the late-1990’s, the Federal Reserve has actively encouraged the channeling of trillions of dollars of savings into speculation. Recurring cycles of malinvestment and crisis have progressively weakened the resilience and long-term growth prospects of the U.S. economy.

The coming collapse will be three pronged as stocks, bonds, and real estate are all simultaneously overvalued. Junk bonds are the canary in a coalmine. High end real estate in NYC has topped out. New and existing homes sales growth has stalled out. Retailers desperately slash prices to maintain sales, while destroying their profits. Corporate profits are falling. The stock market is teetering on the edge. If you can afford to lose 50% of your retirement savings, now is the time to buy some Facebook, Netflix, Google, or Amazon on margin.

Given the valuation extremes we presently observe in the equity market (see Rarefied Air: Valuations and Subsequent Market Returns), our view is that spiking yields in the junk debt market are a precursor of significant losses in stocks, as we’ve observed in other market cycles across history.

At current valuations, the notion that “There Is No Alternative” (TINA) to zero-interest cash is profoundly incorrect. The only thing that equities offer here is to promise wider extremes of panic, despair, excitement, and hope over the coming 10-12 years, on the way to overall returns no better than safe, liquid cash equivalents are likely to achieve.

Over the last two decades the Fed’s interventionism has created artificial booms and real busts. Their dreadful mistakes are “fixed” by currency debasement, lower interest rates, and money printing – creating even worse mistakes. They have successfully gutted the American economy and left a hollowed out shell.

Moreover, as we should have learned from the global financial crisis, when the Fed holds interest rates down for so long that investors begin reaching for yield by speculating in the financial markets and making low-quality loans, the entire financial system becomes dangerously prone to future crises. If the Fed’s mandate is really to support long-run employment and price stability, the first priority of Congress should be to rein in this cycle of activist Fed intervention; to end the Fed’s ability to promote yield-seeking speculation and malinvestment that only produces inevitable crises and weakens long-run U.S. economic prospects.

Bernanke is no hero. He did not save us. He saved his cronies on Wall Street and their captured politician lackeys in Washington DC. The unholy alliance between central bankers, corporate America, and corrupt politicians resulted in Glass Steagall being repealed and allowing Wall Street to run roughshod over our economic system, reaping riches during the good times and heaping the inevitable losses onto the backs of taxpayers. That’s the new American Dream.

Some would argue that the Federal Reserve “saved” us from the global financial crisis. I couldn’t disagree more. My view is that the financial crisis was caused because the Fed overly depressed interest rates in the early 2000’s, encouraging investors to reach for yield in mortgage securities. In response, poorly regulated financial institutions, with banks free from the constraints of Glass Steagall, and other institutions having inadequate capital requirements, created a huge mountain of new, low-grade mortgages in the frenzy to create more “product.” The easy lending created a housing bubble, but someone had to hold the mortgages when they went belly-up, and those holders were banks, insurance companies, hedge funds, and individuals. As the mortgages went into foreclosure, banks had to mark the value of those mortgages to market value on their books, to the point where the value of their assets was less than the value of their liabilities: insolvency.

The liquidation of insolvent criminal Wall Street banks would have set the country back on the path to legitimate recovery. Instead, the ruling class chose accounting fraud, QE to infinity, and screwing senior citizens with 0% interest rates.

In hindsight, the financial crisis actually ended – precisely – in March 2009. How? The Financial Accounting Standards Board changed rule FAS 157 and overturned the mark-to-market requirement, instead allowing financial institutions “significant judgment” in the way they valued their assets: often called mark-to-model (or as some of us call it, mark-to-unicorn).

John Hussman warned those who chose to listen in 2000 and 2007 about the impending collapses. He has been warning those who choose to listen for months again. This market has gone nowhere in the last 13 months. It’s about to go somewhere, and that is DOWN. Remember 2000 and 2007. Enjoy the trip – deja vu all over again.

In the absence of clear improvement in market internals – and last week was categorically opposite to that – I view the stock market as being in the late-phase of an extremely overvalued top formation that will likely be followed by profound losses over the completion of this market cycle, and the U.S. economy as being on the cusp of a new recession.

Remember, 100 years ago there were 50,000 private banks in the US and no central bank.
We were on the gold standard and there was no income tax. Then in 1913 the congress
gave away it's DUTY to coin and print money to the Federal Reserve, who is now Goldman/Sachs
Chase/Morgan and the gang. Private banks not beholden to the Federal Govt. or We the People.
We the People are just the host that the parasite sucks off of.
I really believe the game Monopoly was the game of choice for a couple generations just to
indoctrinate the masses into acceptance of a very destructive system of control. Now that the
Monopoly has been attained over the money supply and the future looks bleak, how long before
we are sold out lock stock and Government into war and rebellion, outright socialism? or who
knows what direction this will take.

The easiest way to break the monopoly is to repeal the legal tender acts.