THANKS, OBAMA: The Taliban and ISIS are making "unprecedented gains" in Afghanistan

Writing at Institute for the Study of War, Jessica Lewis McFate, Rob Denaburg, and Caitlin Forrest have produced an encyclopedic summary [PDF] of the current state of Afghanistan. And the news -- as you could have predicted with this administration -- is dire indeed.

The Taliban and ISIS are on the move.

Taliban forces are making unprecedented gains in areas that had been cleared and held during the surge, threatening provincial capitals in northern, southern, and eastern Afghanistan. Wilayat Khorasan has also begun to exert social control in Afghanistan, specifically in Nangarhar province, but this control has not yet extended to district centers. The ANSF lack the higher headquarters and mobility functions to conduct simultaneous or sequential campaigns to counter geographically dispersed threats. NATO lacks the force structure and authority to close this gap even with the enduring presence of 9,800 U.S. troops in 20161.

Violent competition for power among militant groups has increased, particularly as the death of Taliban founder Mullah Omar became known, and is an increasing the threat to the Afghan government. The overall threat level in Afghanistan is sharply on the rise without sufficient mitigation... 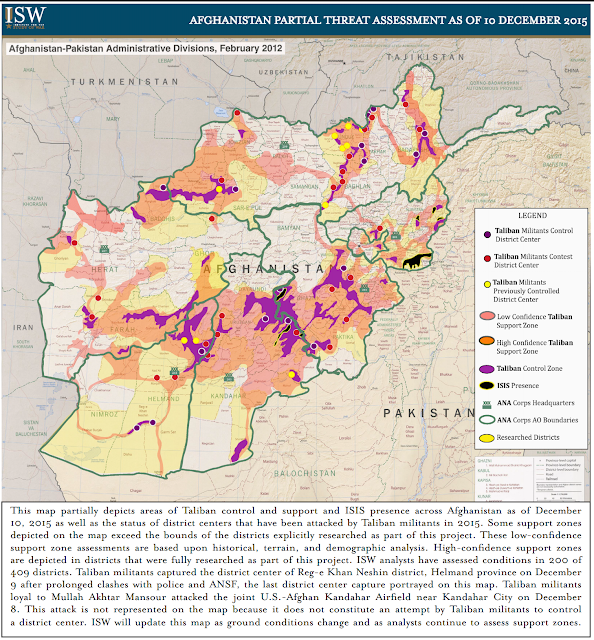 ... Conclusion: Afghanistan is sitting at the same precipice as Iraq before the fall of Mosul.

ANSF are engaged in operations to defend fixed positions with limited ability to clear militants from
proximate areas. Afghanistan’s unity government faces multiple internal threats, to include irreconcilable regional powerbrokers like Mohammad Noor Atta, who may respond to the ANSF’s demonstrated lack of capacity by accelerating Afghanistan’s descent back into civil war.

Taliban militants are exploiting the ANSF’s lack of capacity to weaken the Afghan state, and ISIS is exploiting the vulnerabilities of the Taliban movement in turn.

ISIS will recruit disgruntled Taliban members in the midst of internal disputes, which will increase in scope with the death of dissident Taliban commander Mullah Dadullah and the reported injury of Taliban leader Mullah Akhtar Mansour on December 2, 2015.

The implications of Mansour’s incapacitation or death are far-reaching, as al-Qaeda leader Ayman al-Zawahiri pledged allegiance to Mullah Akhtar Mansour in August 2015.

The contest for control of the Taliban movement, the global jihadist movement, and control of terrain within Afghanistan will accelerate as the stakes increase and the opportunity to challenge the ANSF expands. The threat posed by militant groups extends to Afghanistan’s most populated cities, including Kabul, Jalalabad, Kunduz, and Kandahar as of December 2015, heightening the threat of civil war.

NATO’s Train, Advise, and Assist mission alone will not prevent Afghanistan’s most dangerous contingencies in 2016.

In short, Afghanistan is poised to become another lost cause, along with Iraq, Syria, Libya and the rest.

And the country is reverting to a pre-9/11 haven for Islamist terror.

Remember how Barack Obama blamed Bush for all of the problems he'd inherited -- for years and years and years? I'd like you to imagine what the next president (and the real victims of his bizarre policies, we, the American people) is going to inherit from this one.