The Islamic State may have gotten a passport printer, and could be using it to send militants into the United States carrying Syrian passports that are by all appearances authentic, according to a Homeland Security intelligence report.

ISIS likely obtained an intact passport printer and “boxes of blank passports” from a Syrian passport office in Deir ez-Zour when it took the city last summer, the report, obtained by ABC News, states. The group’s de facto capital, Raqqa, also has a printing office according to the document.

“Since more than 17 months [have] passed since Raqqa and Deir ez-Zour fell to ISIS, it is possible that individuals from Syria with passports ‘issued’ in these ISIS controlled cities or who had passport blanks, may have traveled to the U.S.,” the report states. 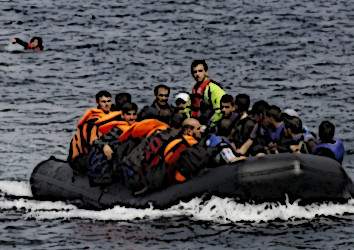 “The story seems plausible to me,” terror expert and Northeastern University professor Max Abrams told The Daily Caller News Foundation, referring to the possibility ISIS militants have used the printer to infiltrate the United States.

“It has been a bad couple of months for globalization,” he continued, saying the “weak boundaries” of Western countries have led to attacks like what was seen in Paris and San Bernardino.

Two of the ISIS supported suicide bombers in November’s Paris attacks had fake passports, although it’s unclear where they obtained them. And Tashfeen Malik, one of the terrorists from the San Bernardino shooting, was able to travel and live in the United States off of what is called a K-1 visa that is commonly used for fiances of American citizens. (RELATED: A History Of Terror: San Bernardino Shooters Spoke Of Attacks In 2013)

The weakness of current vetting processes and holes in document verification could be replicated, Abrams told TheDCNF. “Terrorists are not that innovative,” he said, and if they see a successful attack like San Bernardino they will likely copy the strategy.

According to Abrams, the danger posed by ISIS potentially having a passport printer could be grave. The United States has a good verification process compared to most other countries, he said, but there can be significant slips in the cracks internationally where standards aren’t as rigorous.

“Greek authorities don’t know who [the Syrian refugees] are,” Abrams told TheDCNF. It is particularly difficult to not only vet the large numbers of individuals, but some governments do not have the logistical capability to check their documentation properly.”

Abrams said authorities should be careful about how they view the refugees. “There are a lot of defections between Islamic groups,” he said, meaning authorities should not make assumptions as to who they refugees may claim to be.

The best policy is a middle ground approach — a “smart policy with a heart” — that may need to include a temporary ban on Syrian immigration, because the current vetting process simply isn’t good enough, and because we don’t know enough about the refugees themselves, he said.