GOP NOMINATION TRACKING CHART: And Some Thoughts About the Current State of the Race

• I’d be interested in knowing exactly how many tens of millions of dollars the donor class has blown on Yeb Bush. Even more interesting would be to know how pissed off they are at the RNC and its bevy of Roveian scam artists "consultants" who promised yet another winner and instead delivered a turd.

• Ben Carson's star had begun to fade even prior to the Paris terror attacks, but the former neurosurgeon went into freefall as national security took a prominent place on the debate stage.

• Marco Rubio’s drop appears to have begun when he embarked upon a series of disingenuous attacks on Ted Cruz, for which he was roundly (and rightly) pilloried by multiple national politicians and pundits, including Mark Levin. 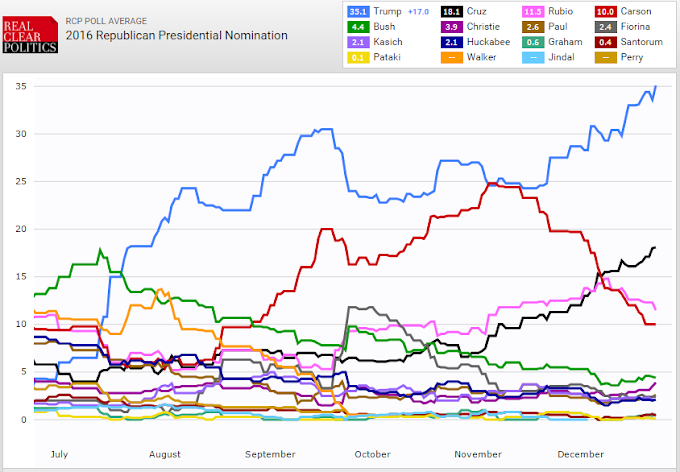 • Using a microscope, please notice the tiny tick up for Chris Christie; doubtless he will now be positioned as the logical GOPe successor to Yeb, since John Kasich was hauled off in a white wagon for yelling at his neighbors. Christie’s problematic positions on global warming and Amnesty for illegals, combined with his bizarre affinity for Islamists, make him a non-starter.

It's gotten to the point where establishment alarm over a Trump candidacy has congealed into this:

The GOP establishment, confronted by a recalcitrant electorate that refuses to leave Donald Trump, is being forced to take a fresh look at Ted Cruz, a man with grassroots strength in key early primary states and few friends in Washington...

...A small and growing number of Republicans allied with the establishment -- the force long thought to quickly consolidate against a surging Cruz bid -- are coming to terms with the idea that he may be palatable in an election cycle where Trump has pushed the envelope well beyond what they considered acceptable.

...Cruz's steady rise means that even if Trump were taken out by a well-financed negative campaign, they might have to deal with a stronger Cruz, who has more political polish than the more improvisational Trump.

"If you talk to my peers around town, collectively it's an appreciation the guy is smart as hell," explained a senior Washington Republican who is backing another candidate. "He can be a more acceptable alternative to Trump, if it comes to that."

The irony hasn't escaped them. Said the Republican: "It's an interesting life -- and everything's relative."

If Cruz continues to gain ground, as Rogers notes, "he's going to have a bunch of new friends."

Should such a miracle come to pass, he would be the first nominee since Ronald Reagan to have taken on the establishment and won.

Failing to realize that NO GOP will win without dragging across some Dems/Indep/Others makes this pipe dream moot. Trump is the one and only acceptable nominee. They're only saying that because they feel Cruz will embarrass them less, but they KNOW he is unelectable.