The terrorist couple from San Bernardino and their mother had stickers and certificates of appreciation for membership in the Islamic Circle of North America (ICNA) in New York, a group with known ties to terrorist organizations, and a group whose members and speakers have included Siraj Wahhaj, an unindicted co-conspirator in the 1993 World Trade Center bombing, and Anwar al-Awlaki, a radical preacher who had significant ties with three of the 9/11 hijackers. 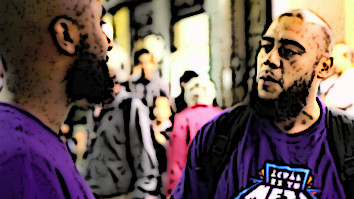 The California terror couple had an Allah-praising sticker slapped on a dresser drawer in their town house that traces back to a Muslim organization with headquarters in Queens, The Post has learned.

The decal, which has a prayer for coming out of the bathroom, is from the Islamic Circle of North America Sisters’ Wing, and says, “Praise to be Allah Who relieved me from the suffering and gave me relief.”

The mother of terrorist Syed Rizwan Farook, 28, attended classes at the ICNA’s Los Angeles branch, and graduated from a course titled “Journey through the Quran Session” in the summer of 2014.

A “certificate of appreciation” awarded to Rafia Farook was found inside the couple’s Redlands home when reporters were allowed to enter on Friday.

The Islamic Circle of North America has recently been promoting a program called WhyIslam, a billboard campaign to ‘reclaim the message of Islam’ after it had been tainted by events such as those in Paris.

The WhyIslam campaign however, has controversy of its own. The group’s former chair, Amir Mertaban, referred to Hamas terrorists as freedom fighters who have ‘done a lot of good’ in Palestine, and he refused to denounce the group.

In 2008, WhyIslam ran a series of Muslim subway ads, promoted by a Brooklyn imam whom federal officials had linked to a plot to blow up city landmarks. That Brooklyn imam is Siraj Wahhaj, the unindicted co-conspirator in the 1993 World Trade Center bombing.

It should be noted that the ICNA released a statement denouncing Awlaki’s views – nearly eight years later – but noting that at the time of his appearance, he had not been accused of any extremist ties, and that he had only started making radical lectures after being detained in 2007.

This is, of course, a flat-out falsehood. In fact, here’s a bit of what was already known regarding Awlaki at the time of his ICNA appearance:

Awlaki, who had inspired many to acts of Islamic terror, was killed in an American drone strike in 2011.

Here is some more background reading about the key players at the ICNA.