WHY, THIS DOESN’T SEEM STAGED AT ALL: 9-Year Old Asks Hillary About Gender Pay Equity at Town Hall

It's a pity that no regular American (a descriptor which automatically excludes 95 percent of all "professional journalists") can get close enough to Granny Catlady to ask her a serious question. Instead, she's fielding carefully lobbed softballs from the likes of 9-year old Red Diaper Baby:

• Nine-year-old Relic Reilly told Hillary Clinton that his mom, a preschool teacher, was complaining that she earned less than his dad, a software engineer 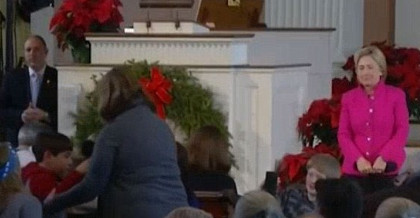 • The mother's Twitter account describes taking Relic and his twin to an anti-Mitt Romney protest, with signs for them to hold, when they were 6

Heaven forbid that the Godmother of ISIS field a serious question, say, like why she lobbied for an invasion of Libya, leading to the rise of ISIS and the little matter of 20,000 "lost" missile launchers.

Now that I think of it, the first name 'Relic' seems rather apt for a scraggly band of Sixties retreads like this pair of miscreants.

In fact, this couple could earn more money by working harder and serving less as unpaid props for the most crooked presidential candidate in modern American history.

Trump will introduce her to reality.

In front of millions.
MM

She, of course, didn't tell Relic that there are male teachers who don't make as much as his dad.

Children should not be used as props by attending protests, rallies, or political events, until they are old enough to understand. That goes for both sides of the aisle.

By-the-way, who names their child "Relic"?! If had been spelled with a "k" they could claim eastern European, or some such.