The recently married Congressman from New York, Anthony Weiner, appears to have bungled the dispatch of a direct message on Twitter, instead sending a very public tweet. The reply, sent to an unnamed female, linked to a photo of a thin white male's groinal area, in brief-style underwear, while in a state of arousal.

This evening a photo surfaced on Congressman Weiner’s yfrog account and in his verified Twitter timeline of a man in his underwear with an erection. The photo was reportedly sent to a woman on Twitter. We’ve protected her name and her account, which was at one time verified to be active but has since been deleted after the photo in question was deleted...

...Coincidentally, the rest of the photos in the congressman’s alleged yfrog account were also deleted around 11 p.m. eastern... 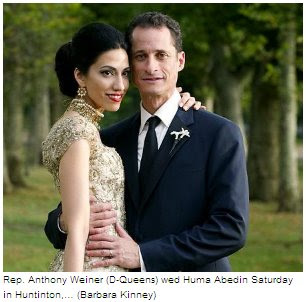 I'm guessing that's the weiner story Weiner is sticking with.

Remember that a Republican -- Rep. Christopher Lee (NY-26) -- resigned after a similar, less lewd, photo was published on an Internet dating site.

But Democrats operate under a different set of rules than the rest of us.

• Rep. Gerry Studds continued serving in Congress even after being censured for having sex with a 17-year old Congressional page.

• Rep. Barney Frank continues to serve in Congress even after a series of sex-related scandals including the discovery that a gay prostitution ring was operating out of his home.


Linked by: American Power and Memeorandum. Thanks!

at 11:16 AM
Email ThisBlogThis!Share to TwitterShare to FacebookShare to Pinterest
Labels: Crime, Democrats, Weiner

off topic (or maybe not) my friend send me this exceptional educational vid on what we are fighting against-ie corrupt Collectivists destroying our right to Individual autonomy:

Weiner contends that someone hacked his account and uploaded/sent this picture? Really? One would think that someone taking the trouble to hack a public figure's account to send lewd photos might have chosen something a bit more aggressive than an underpants-on shot.

I created a hilarious graphic several months ago just waiting for just such a story to arise.

You can see it here:

has anyone managed to grab an original copy of the photo that was posted to yfrog? Did you check the exif data?

That wife has no muscle tone at all.

Seriously?! We have far more important issues than a crotch shot and crucifying an effective orator of public will is certainly not the path we should be going on. In Europe, a politicians life is just that — private. Even Ann Coutler told Morgan on CNN that she likes to keep it private. Meanwhile, Vitter has not resigned!? CROTCH ON WASHINGTON! POST YOUR SOLIDARITY PICTURE AGAINST THE MARRIAGE OF SEX AND POLITICS AT www.weinersupport.com!