1) Imagine you are a hacker and want to send one blast twitpic from Weiner's account, what do you send? Hmmm...

Answer: something much more hackworthy than the Weiner in grey undies.

2) Since Jon Stewart (and Huma Weiner) both know what this weasel's skinny legs look like, you think Jon will go there tonight? You know, speak some truth to power? 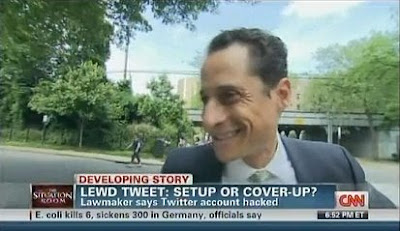 "Its a semi-known and entirely weird fact that, after college, New York Congressman Anthony Weiner and Daily Show host Jon Stewart shared an apartment in Soho. Well, technically, Stewart and Weiner's girlfriend shared an apartment, and Weiner was the guy who was there all the time, walking around in his boxers and drinking the last of the milk. "I was living there more or less because I was bumming off of my girlfriend," Weiner tells City Scoops today. "Technically speaking, I was living in my mom’s house." But they still talk, and Weiner dutifully TiVos The Daily Show every day. But he's not sure if he likes it. "I think it has a bit of a corrosive effect on my business," he says."

I wonder if Weiner the hacker ever sent raunchy photos to the female high-school student and the other young cuties he followed?

And, say, I wonder if legacy media is working on that angle? That's a rhetorical question, Sparky. Of course they're not. He's a Democrat. Hell, he could smash his car into a pond, drown a woman, not report it for half-a-day and then still be a lionized hero to the Left.

at 7:05 PM
Email ThisBlogThis!Share to TwitterShare to FacebookShare to Pinterest
Labels: Crime, Democrats

Why hasn't this hit the Drudgereport yet??