Countrywide Financial was arguably the lynch-pin of the entire financial crisis.

And to keep government officials at bay, it offered a program called "Friends of Angelo" (referring to Angelo Mozilo, chairman of Coountrywide) that offered special deals to powerful Democrats in government and in government-sponsored entities like Fannie Mae.

Just how sleazy was the Countrywide operation? There are some great details in a newly released legal complaint (PDF) that dissects the alleged activities and asserts that Auric Orangefinger -- my nickname for the pumpkin-skinned Angelo Mozilo -- was well aware of the skulduggery.

...Mozilo was further driven by his belief that Countrywide’s riskier loans faced imminent default. In a June 1, 2006 email regarding pay-option adjustable rate mortgages (“ARMs”) Mozilo warned Sambol and other executives that borrowers “are going to experience a payment shock which is going to be difficult if not impossible for them to manage.” Mozilo warned that “[w]e know or can reliably predict what’s going to happen in the next couple of years.” Mozilo acknowledged internally (but never disclosed to MBS investors) that the majority of pay-option ARMs were originated using stated income, and that evidence suggested that borrowers were misstating their incomes... 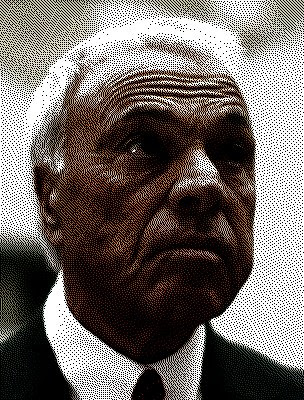 ...Countrywide’s Chief Risk Officer John McMurray testified that his credit risk department “would reject proposals for new products but the people in sales nevertheless used the exceptions procedure to achieve the same result.” He was “surprised, angry, and disappointed,” for instance, when he found out Countrywide had advertising fliers promoting loans that had low FICO requirements, only required a stated (non-documented) income, and provided 100% financing even though the credit risk department had previously rejected those flyers...

...despite the fact that almost all of [the purchased] Certificates started out with AAA or Aaa ratings -the same rating given to treasury bills backed by the full faith and credit of the United States government - 94% of them are now not even considered to be investment grade...

...Countrywide had a policy of matching individual terms of any mortgage product that a competitor was offering. A former finance executive at Countrywide explained that: “To the extent more than 5 percent of the [mortgage] market was originating a particular product, any 29 new alternative mortgage product, then Countrywide would originate it…. [I]t’s the proverbial race to the bottom.”

...To conceal its greatly increased volume of subprime loans, Countrywide employed an internal, undisclosed definition of prime versus subprime, and thus, in its public reports, Countrywide Financial classified loans as “prime” that clearly were subprime under well-established industry standards. A former senior underwriter at Countrywide reported that Countrywide regularly classified loans as “prime” even if they were issued to non-prime borrowers, including people who recently went through bankruptcy. According to the SEC, Countrywide included in the prime category risky loans with FICO scores below 620, which did not meet industry standards for “prime” loans, and further included loans with increasing amounts of credit risk such as reduced or no-documentation loans and pay-option adjustable-rate mortgages (“ARMs”)...

...According to the SEC, Countrywide’s culture of “exceptions” started at the top, with Mozilo personally approving loans by way of guideline exceptions pursuant to a “Friends of Angelo” program...

The "Friends of Angelo" program was, in truth, a sleazy operation designed to reward Democrat politicians in oversight roles and former Clinton administration officials who carried significant sway.

In turn, these useless Democrat hacks allowed federal policy and the GSEs -- Fannie and Freddie -- to get away with murder. The end result was the collapse of the GSEs and the resulting mortgage meltdown.

I urge you to remember in 2012 what these Democrats have done to you, your family and this country.

Memo to the Demo-hacks who pumped up the housing bubble with bad loaning practices dictated by PC government regulation, starting with Carter's CRA, ultimately creating the financial crisis that elected the Empty Suit Known as Barack Hussein Obama: we're not letting this go until you can't elect anybody, anywhere, ever again.

One wonders, how did Angelo know, when he began the fraud, that he would not go to prison, and would be allowed to keep 90% of the swag?

Who has the clout to make that promise, and have Angelo believe in it?