The Border Protest You Never Heard About

President Obama visited El Paso, TX on May, 10th and mocked those concerned about border security with tales of "moats and alligators". Upon hearing this rhetoric, a group of citizens directly impacted by Democrats' open-borders policy decided to take action, not that you'd ever hear about it from legacy media. 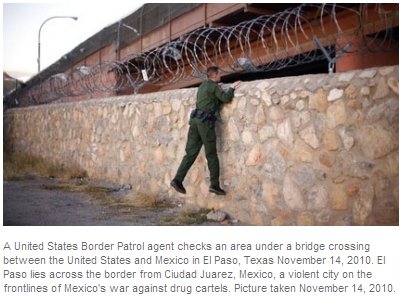 The residents of the Chiricahua-Peloncillo drug and human smuggling corridor that runs from the Mexican border north through eastern Arizona and western New Mexico are circulating a petition to send to the White House in response to President Obama's recent immigration speech.

"It is with great wonderment and sadness that we listened to your May 10 speech on immigration issues. All of the joking about moats and alligators cut residents of Portal, AZ, to the core as we sheltered with friends or at a Red Cross evacuation site, to survive a terrible fire that still threatens our lives and property, as well as our ecotourism-based economy," the letter reads.

On Sunday, a massive fire broke out in Horseshoe Canyon, about 50 miles north of the Mexican border, which residents and law enforcement say they believe was started by criminal illegal aliens. Last year, a fire in the same location caused more than $10 million in damages.

"During its first 24-hrs, the fire consumed a greater area than did last year's fire over a 6-week period. Local residents were roused after midnight, and some slept fitfully in cars after fleeing with family photos and any valuables that could be quickly assembled. Elderly retirees left with medical supplies, including oxygen tanks on which some depend," the letter reads.

...Jeff Gee, one of the organizers behind the petition and a firefighter battling the still-burning fire in Horseshoe Canyon, says he was insulted by Obama's speech... "We’re doing everything we can to get the word out that this is serious problem, it’s not just a border issue, the drugs and crime are moving through the corridor and they keep going to major cities. I don’t know if this letter will help, but nothing else is."

Cochise County, Ariz., Sheriff Larry Dever, who penned an op-ed in The New York Times Friday describing the plight of border residents, [said] that the petition is a plea for the administration to take a closer look at the hardships they are suffering... "These people are not overreacting. What they suggest in letter is very deep part of their belief system based on their experience and their experience has been horrific -- they see human smuggling and drug trafficking, they sit on their porch and watch people walk through, they've had their homes burglarized," Dever said.

...In the letter, petitioners say that despite the president's protestations, "neither the border nor daily life" is secure... "Seizure of record quantities of drugs may pad the statistics of Homeland Security, but it does nothing to ease the burdens we have been forced to bear. Over the years, as our homes have been burgled or invaded, our fences, water lines and windows repeatedly broken, our businesses driven toward bankruptcy, our natural surroundings desecrated by trash and fire, and our lives even obliterated (neighbor Rob Krentz, murdered by a drug scout), it has amazed us how little note is taken of these tragedies by our government and the press," the letter reads.

Unfortunately, these pleas are certain to fall on deaf ears, because the Democrats need the votes, man!

And I don't mean the votes of legal immigrants, Hispanic or otherwise. I mean undocumented Democrats.