With a major drought and 2.5 million acres consumed by flames, Texas has been repeatedly rebuffed in its efforts to have the state declared a 'major disaster' area by FEMA. The Governor of Texas, Rick Perry, and other officials believe the White House is pursuing a "political vendetta" against Texas by refusing aid.

On top of that, it would appear that the Bureau of Alcohol, Tobacco and Firearms may have touched off another wildfire that destroyed 150 acres.

The fight between Texas and Washington, D.C., over wildfires in the Lone Star State just got nastier... A county official in the Texas Panhandle is now blaming a federal agency for starting one of the fires through carelessness. 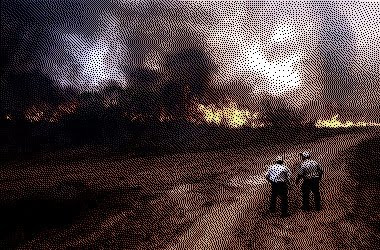 Tom Edwards, the county attorney in rural Motley County east of Lubbock, said on Friday that the federal Bureau of Alcohol, Tobacco and Firearms and Explosives was responsible on Tuesday for sparking a fire that consumed 150 acres.

"You can quote me on it: That bunch has a real corner on stupid," Edwards told Reuters.

Tom Crowley, a spokesman with the federal agency, said bureau officials were assisting four local bomb squads -- at their request -- to destroy some explosives. Firefighters were on hand, he said. The wind picked up, but the explosives were too dangerous to move, so the officials went ahead and destroyed the explosives.

..."We've got the federal government that has refused to provide assistance to the state on the request of Governor Perry because of all our statewide fires, and then in waltzes federal agents and they start a fire," Edwards said... "We had high winds, we're under a burn ban because of extensive prairie fires, brush fires, and in they rolled with the idea of blowing up things."

...Fires covering some 203,000 acres were still burning as of Friday, according to the Texas Forest Service. The state remains dangerously dry, with 47 percent of Texas listed as in "exceptional drought" by the U.S. Drought Monitor.

Along with Gov. Perry, Senators John Cornyn and Kay Bailey Hutchison have repeatedly blasted the White House for denying the state's request for a federal disaster declaration.

Cornyn observes that the state has not even entered the hottest months of the year and that the unfolding disaster will be worsened by the Obama administration's Chicago-style machinations.

at 10:17 AM
Email ThisBlogThis!Share to TwitterShare to FacebookShare to Pinterest
Labels: Climate, Crime, Democrats, Obama

The Feds sent aid to help with the Mexican fires. Obama, the "Blue States of America" president.

Why even bother? Document the disaster, and then use that documentation to demand the federal government not help every other state. By demanding disaster relief, they are only strengthening the argument that the state is the slave of the fed.

The leading nuclear power project, next in line for the federal loan guarantees, was also cancelled by its principal investor. It was to be built to serve Houston.

I suspect that the Obama Administration's hasslement of the state of Texas had something to do with it.

As a former Texan who still cheers that state on, I can only cry, "SECEDE!"

Hm. A bit of perspective might be needed. 1 square mile (a Section) is 640 acres, so this is about a quarter of a Section. In very dry Texas grassland, this could support anywhere from 1-20 cows.

Now consider the local bomb squads AND the BATF have stacked unsafe explosives up for destruction in this remote area (you don't do it around houses), are ready to light the fuse....and the wind picks up.

It costs $$$ to keep your guys standing around, you can't just leave the explody stuff unguarded, and you sure don't want to pack it back up again (its unstable, thats why it needs to be destroyed). So light the fuse and fight the resulting fire, which burnt (not "consumed") about a quarter-mile of Texas dry grass. Not bad in areas that light off tens of miles of grass in "Controlled burns" every spring in order to allow the new grass to grow in without being smothered by the dry top cover. (Admittedly this year is freakishly dry, and all burning would do is to expose dry dirt with no new grass)

I'll give this one about a 3 on the Government Stupidity-o-Meter. And the meter goes to 11. :)

Kiss our ass Texas. Deal with it.
Signed America