Did you know that the United States has 57 states?

Or that 10,000 people were killed by a single tornado in Kansas?

All of these assertions were made by none other than Barack Obama. Most recently, New York Magazine reports that President Obama signed the guestbook in Westminster Abbey with a date that was only three years off.

This is how President Obama signed the guestbook at Westminster Abbey earlier today, where he got a tour from the Very Reverend Dr. John Hall and laid a wreath on the Grave of the Unknown Warrior. 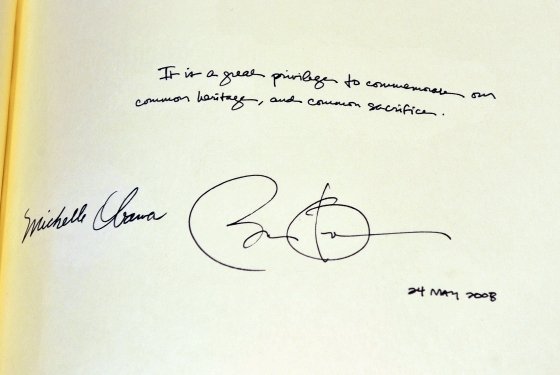 It is a great privilege to commemorate our common heritage, and common sacrifice.

It was really nice until he got the date wrong by three years. Granted, 2008 was a great year for him, and we might try to live it for as long as possible, too, if we were him. Also, though, he may have had a stroke.

Can you imagine the outcry from legacy media had George W. Bush committed just one of these gaffes?

Of course, media double-standards are nothing new for #44. We have Bush's college transcripts. Where are President Obama's?

Lefties still get a chuckle about that.

In Zero's other oopsie-la-la moment across the pond, the horribly awkward toast to the queen was priceless in its cringeworthiness. I played it for the wife and laughingly joked that this guy could F up a cup of coffee. Quoth the wife: