And Charles Krauthammer, a former speechwriter for Walter Mondale, says that Cain's campaign is "just entertainment."

I like the guy, but his candidacy is just entertainment. He might drain some "new guy on the block" votes from, say, Michele Bachmann... 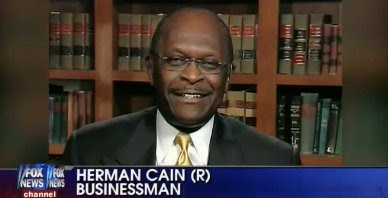 ...I don't think the guy's going to have a big impact on the race.

It's worth remembering that in 1980, George Will and Charles Krauthammer supported Howard Baker and Walter Mondale, respectively.

This pair of professional analysts -- while certainly quite bright -- has a tin ear when it comes to understanding what America, not the Beltway, wants.

Which is probably very good news for Herman Cain.

Amen, Herman is awesome. Everyone that hears him speak is a convert. He's a limited government, constitutionalist and will really cause liberal pain and suffering.

It's a wonderful thing.

I happen to like the Herminator best of all the current candidates. That said, I also like Krauthammer. Krauthammer is very intelligent, but when he gets things wrong - which is not all that often - he gets it wrong big. And he think this is one of those times.