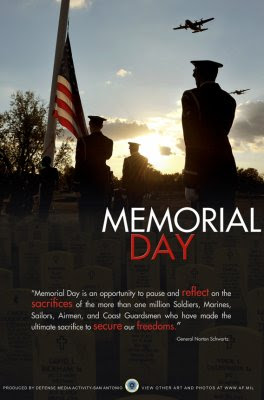 Memorial Day 2011: Honoring the fallen: Malkin
They Who Serve: AT
The Last Full Measure of Devotion: Ace

THIS Is What American Troops Are Made Of…: Publius
Memorial Day 2011: BlackFive
Obama to Mark Memorial Day in Proper Style: Dossier

WeinerGate: MSM Ignores Trifecta of Sex, Politics, and a Rising Political Star: BigGovt
Anthony Weiner “Hacked”-Follow up with formal complaint to FBI (Weinergate): Ameristroika
George ("Howard Baker in '80!") Will: Everyone Knows That Palin Should Not Be Trusted With Nukes: OTB

Smartphone Simulates Sensation Of Buttons On A Touchscreen: CrunchGear
InsecureID: No more secrets?: I, Cringely
Women who lose weight more attractive than their slim counterparts: Telegraph

Back From Europe - The Most Interesting Man In The World: Cube
Active military and veterans hold less favorable view of Obama’s performance: DC
Paying tribute to dogs of war: Post

Image: Sondrakistan
Today's Larwyn's Linx sponsored by: This Memorial Day, Be Their Hero

QOTD: "...hacks [like that which Wiener is alleging] these days are crimes, and are especially serious when directed at Members of Congress. If his Twitter account has been compromised, what else would the attackers have access to? Instead of reporting the attack to the FBI though, Weiner has made jokes, and in fact keeps joking about it. This is unreasonable behavior in the face of an actual attack, however if it weren’t hack, then to report one would probably be a crime in itself.

So, Congressman Weiner, it’s up to you: Admit the truth, or file a formal criminal report with the attached penalties for filing a false report. Your own party has been making a big deal about “Cybersecurity” lately as a pretext for an Internet Kill Switch and other power grabs. Set an example, or admit the old Reichstag routine. Your call." --Neil Stevens

Anyone want to wager on when the Government/Media will begin to actually report the bad economic news along with all the Obama administration scandals so that they get them out of the way for the 2012 campaign?

Odds are the Obamists will have to let out the really bad economic news so that they can point to improving figures the closer Obama gets to the time of being voted out of office.

Back when Clinton was in orifice, The Donk Media tried to report all derrslickmeister’s scandals and bad news early so that they could pretend they were ‘Old News’ by re-erection time. So you can readily expect the Democratic Media to pull the same kind of trick this time.

You can expect them to come out with all the stories on the Fast and Furious scandal, the Foreign Campaign money issue and all the ‘Chicago way’ techniques of the Obama clan, that way they can get them out of the way and then turn around in a month or two and proclaim them to be out there already and nothing nobody that cares about them.