Civil Society Frays in California as Teachers Are Arrested During 'Occupation' of Capitol Building, Demanding Even Higher Taxes

California is one of the highest-taxed states in the land. Its gasoline taxes are second highest of all 50 states. The state's business tax climate is the second worst in the U.S., ranked 49th by the Tax Foundation. Its state and local tax burden of 11.8% of income is the sixth-highest in the country. And California's progressive income tax pegs the top individual rate as third-highest in the land.

With all that said, California is still running a $10 billion deficit. Standard and Poor's is warning that the state's credit rating -- already worst in the nation -- is "at a crossroads".

But that hasn't stopped California's teachers unions from demanding even higher taxes. 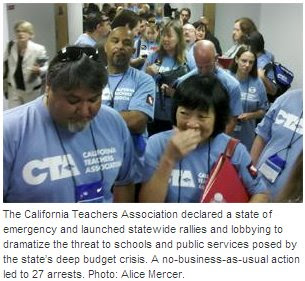 The California Teachers Association declared a state of emergency and launched statewide actions May 9-13 to dramatize the threat to schools and public services posed by the state’s deep budget crisis.

...On our first day, dozens of Cal State University students launched an occupation of the Capitol building at closing time, and 65 were arrested, with several teachers who joined them in solidarity. CTA would carry out its own no-business-as-usual action later in the week...

...This year, with federal stimulus money no longer filling the budget gap, things were going to be worse.

...While teachers from CTA’s 1,100 local associations led the state-of-emergency week, we were not alone. Our sister union, the California Federation of Teachers, joined us... “Unity Day” in Sacramento brought members of the Service Employees, AFSCME, UNITE HERE, and Firefighters.

Here's a news flash for the union bosses: spending is too high, businesses are fleeing and taxpayers are struggling with a horrible economic environment compounded by a huge tax burden and insanely complex regulations.

If California wants to survive, it must break the backs of the public sector unions once and for all.

at 11:10 AM
Email ThisBlogThis!Share to TwitterShare to FacebookShare to Pinterest
Labels: Brown, Democrats, Economy, Obama, Unions

The pandering to illegals have destroyed this state. California's scenery is a beauty; even that is changeing.
I live in San Jose, everywhere I go, graffiti, trash everywhere is the norm. It resembles 3rd world slums in some aeas; the overwelming majority is hispanic, no blacks at all.
What is most shocking is the rudeness of many of the hispanics here; almost condescening.
I am by no means anti-immigrant; I'm one myself, although I a legal immigrant.

They could always "tax the rich".