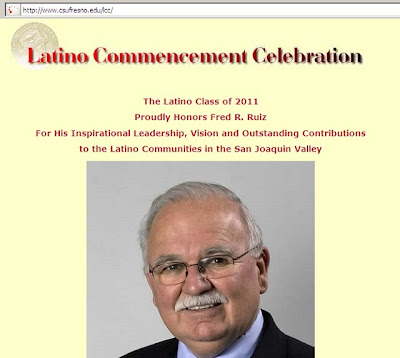 I wonder whether CSU held separate commencements for blacks, whites, native Americans, and other groups.

As for the politicians who support illegal immigration and Balkanization, I wrote the following in "What Democrats Believe":

These temporary politicians -- these useless Democrats hacks -- no longer represent the people. They represent illegal aliens, who are trespassing in our country; who are entering our land without any background checks or vetting procedures; who are driving up unemployment among citizens; who often come for free health care services or schooling or more nefarious reasons; who do not understand the history or traditions of this country; and whose presence here will ultimately Balkanize this country in ways no one can possibly foresee.

For Democrats, clinging to political power trumps the Constitution; it trumps the laws they have passed; it trumps the concerns of the citizenry; it trumps every moral and ethical tenet of this country. But their appetite for raw power is so insatiable, and it is so naked and malevolent, that they are willing to sacrifice future generations so they can climax on unchecked power.

The Democrat Party must be politically crushed in 2012 if we are to save this Republic.

at 7:14 PM
Email ThisBlogThis!Share to TwitterShare to FacebookShare to Pinterest