It's come to this: Toyota creates in-car social network so your car can be all up in your grill with its wants and needs

I love technology, so I'm fine with this, but I could see how some people could think it's overkill. Geezers.

We've gone far beyond that "check engine" light now: Toyota has created a social networking function for its cars so you can friend it on Facebook or have it Tweet you when the gas is low or just chitchat about shoes with it. Because you know, checking the gauge when you're actually in the car would just be too much work. 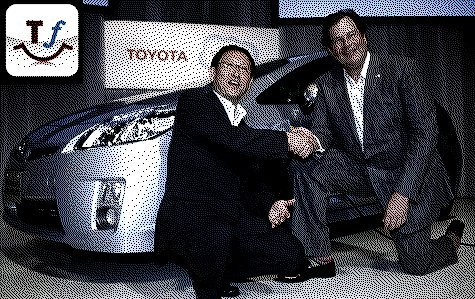 Toyota will be launching its own private social network, Toyota Friend, CNNMoney reports. Beyond the private realm of Toyota Friend, users will be able to extend the communication to friends and family via Facebook/Twitter, receiving updates in your feed and such.

Commenter George4478 wins our prize for the best example of a tweet from your car.

Tweet: My accelerator is stuck. Please drive with caution.

To be fair, Toyota's brake problems were proven to be non-existent. As Kevin Hassett observed last March, "[President Obama] is using the power of government to harass the main competition of his union backers--a company, Toyota, that happens to have a mostly nonunionized workforce... This is the kind of thuggish government action one might expect from Vladimir Putin... It isn't acceptable behavior in our democracy."

Oh. You mean we still live in a democracy? That wasn't apparent to me.