Substitute Teacher in Phoenix, Arizona: This is an Invasion

In late March of this year, Phoenix substitute teacher Tony Hill wrote a letter to his state senator, Russell Pearce. The missive was so shocking that the local television station -- My Fox 10 -- featured the letter on a broadcast.

I am compelled to write to you about a recent event that occurred to me. I currently work as a substitute teacher in the west valley areas of Phoenix, Glendale, and Peoria. I was called upon to teach history and language arts for 8th grade at a Glendale public school. The number of students I had in each class ranged from 28 to 38 children, which were almost all Hispanic and a couple of Black children. The day started out as usual turning on the television listening and watching the announcements and saying the Pledge of Allegiance. During the Pledge of Allegiance I notice the vast majority of students refusing to stand and say the pledge. I asked the students why they refused to say the Pledge of Allegiance and they responded by saying, "we are Mexicans and Americans stole our land." 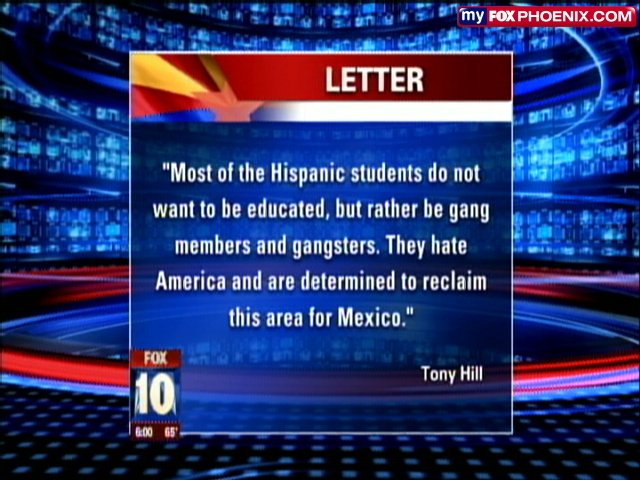 The teacher's instructions were for the students to read a few pages and answer the questions regarding Mark Twain in their history textbook and to finish their final drafts to Senator Steve Gallardo thanking him for his position on Illegal Immigration rights. Their teacher apparently had showed them a video with Senator Steve Gallardo and Lou Dobbs. Most of the students came unprepared for class not possessing paper and pencil. I provided the students with paper and pencils only to have them wad-up the paper and throw it at each other along with their pencils.

The students' final drafts that I read were basically the same. Most of them stated they were in the country illegally, white Americans are racist, and that they came here for a better life. I asked the class if America adopted Mexico's immigration laws would Americans still be consider racist?

That question they could not answer and [they] called me a racist for asking it. I mentioned that my wife and children are Hispanic so how could I be racist? I asked the students to stop speaking Spanish in class because it was impolite to speak a language in front of people who may not speak that language. Their response was that Americans better learn Spanish and their customs because they are taking their land back from us.

When it came to completing the Mark Twain assignment only 10 students completed it out of all my classes. Most of the students refused to open the book, tore the pages out of the book, or threw the textbooks at each other. I thought: are these the students we are trying to educate with taxpayers money? I have found substitute teaching in these areas that most of the Hispanic students do not want to be educated but rather be gang members and gangsters. They hate America and are determined to reclaim this area for Mexico. If we are able to remove the illegals out of our schools, the class sizes would be reduced and the students who wanted to learn would have a better chance to do so and become productive citizens.

I applaud and support your efforts to stop this invasion into our state and country. When the citizens of a country are forced to speak the invaders language, adopt their customs, and forced to support them, are we not a conquered nation? I do not want to see our state and nation turned into a third-world country. Thank you for standing up to this invasion. You may contact me by phone, e-mail, or mail. Thank you, again.

I can't blame Mexicans for attempting to escape their failed narco-terror state: nearly 25,000 people have died there as a result of its ongoing civil war.

But that doesn't excuse American politicians from failing to build a serious security fence to prevent -- literally -- an invasion.

Money is not the problem in "education".

as if taking back land siezed during war over a hundred years ago will cure these students of their apathy and stupidity.

Learn history.
The land was sold to the U.S. for $15 million as part of the treaty of Guadalupe Hidalgo.
It's like they figure that if they sold me a car that was pretty much worthless when they sold it and then I fixed it up and made it beautiful now they can claim I ripped them off.
If they had kept that land it would just be more of Mexico anyways. We already did this experiment.
It's called San Diego and Tiajuana.

Their seen as future Democratic voters and are being schooled for only that purpose. Any real learning might interfere with that.

One of the reasons why American achievement tests are so low is because of the quality of your immigrants. Contrast that to the Asians we get up here in Canada.