In an effort to lay down covering fire for "Red" Ed Schultz -- recently suspended from MSNBC for calling Laura Ingraham a "slut" -- the erudite deep-thinkers at The View tell us that it's perfectly acceptable to call women "sluts" and "whores".

(Begin Clip) ED SCHULTZ, liberal talk show host: President Obama is going to be visiting Joplin, Missouri on Sunday. But you know what they're talking about? Like this right-wing slut, what's her name – Laura Ingraham? Yeah, she's a talk slut. (End Clip) 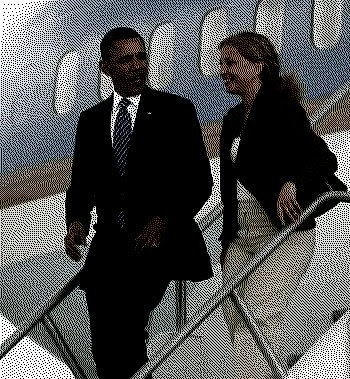 BARBARA WALTERS: I would like to say that Joy Behar, on this program, has called me a slut.

GOLDBERG: Joy Behar has called many people a slut on this program. Did you hear from this woman's organization? Ever?

JOY BEHAR: Why Barbara, when I call her a slut, the truth is an ultimate defense. That's all I have to say. ...

GOLDBERG: Have they [NOW] ever gotten a hold of you and said you can't – you shouldn't be calling women sluts?

BEHAR: Mine is done with humor.

SHEPHERD: Don't you – don't you think it's a difference when a woman is calling another woman a slut verses a man, because he's attacking her –

BEHAR: He was angry.

With The View covering for me, I can safely say that a perfectly reasonable nickname for the Marxist crackpot running the DNC is Debbie Wasserman-Slut -- aka "The Best DNC Chair the GOP Ever Had".

at 10:29 AM
Email ThisBlogThis!Share to TwitterShare to FacebookShare to Pinterest
Labels: Democrats, extremism, Hollywood, MSM, Wasserman-Schultz

Wasser-Manhands is a pinata to enjoy slowly, by savoring every moment of her ridicule. Lars

Sergeant Schultz can be quite the agitator with her appearance as "prison guard-creepy" as her inane strategies. Hogan