Rife for abuse: Nancy Pelosi using Obamacare to reward her friends in S.F.

Not only is Obamacare clearly unconstitutional, it is certain to be abused by political hacks bent on enriching themselves.

It happens everywhere government runs health care: it's used to reward friends and punish enemies. And the opportunist hack known in some circles as "Nancy Pelosi" is among the first to abuse the power. 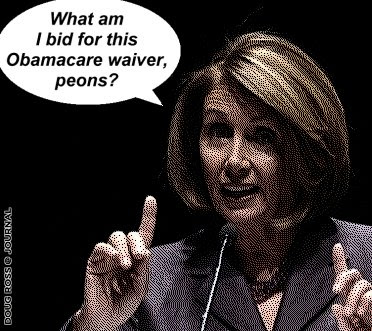 That’s in addition to the 27 new waivers for health care or drug companies and the 31 new union waivers Obama’s Department of Health and Human Services approved.

Pelosi’s district secured almost 20 percent of the latest issuance of waivers nationwide, and the companies that won them didn’t have much in common with companies throughout the rest of the country that have received Obamacare waivers.

...Other common waiver recipients were labor union chapters, large corporations, financial firms and local governments. But Pelosi’s district’s waivers are the first major examples of luxurious, gourmet restaurants and hotels getting a year-long pass from Obamacare...

Congress and government bureaucrats now have the power to reward and punish; to enrich their political allies and bankrupt their enemies; to deny health care services or permit them; to literally play God.