'Are you ready for third-world America?'

The US economy is literally on the ledge of a cliff.

Today, the Federal Government accounts for 35% of incomes and salaries in the US. That’s over one third of all income in the US coming from the Government’s ability to dole out funds.

What supports this largess?

Let’s give that number some perspective. Germany, the world’s FOURTH largest economy is only $3.3 trillion in size. At $2.8 trillion the Fed’s balance sheet is larger than the economies of France, the UK, and Brazil.

Why is the Fed’s balance sheet so huge? Because US Treasuries are so unattractive to foreign Governments that the Fed has had to pick up the slack and buy our debt (usually within a week or two of it being issued).

Let me rephrase that: the US Fed is now printing money so it can buy US Debt because other investors are no longer interested in buying it.

This is just one of the various schemes Washington is employing to maintain its fiscal insanity. Another is the active raiding of pension funds to buy new US Debt (YES, the Treasury is doing this).

So... the US Government is now paying over 1/3rd of US incomes… and it’s financing this by having the Fed buy new debt from the Treasury.

Do you think this entire system might end up collapsing in a horrific manner? 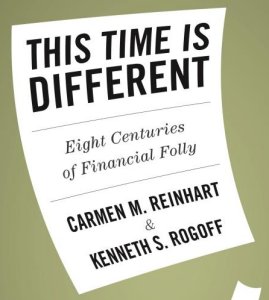 Unless Barack Obama is summarily voted out of office in 2012, I fear this Republic will not survive.

The laws of mathematics simply cannot be defied; and the president's failure to propose a budget, his unprecedented deficits, his failure to address collapsing entitlement programs (and, in fact, accelerating their collapse), and his non-stop attacks on the private sector (the oil, health insurance, banking, and pharmaceutical industries, to name but a few) will result in certain catastrophe.

It's not different this time and, should he win a second term, Obama's reckless, feckless, selfish leadership will almost certainly doom the most magnificent society ever seen on Earth.

And perhaps that's the intent of the man who marinated in the teachings of Frank Marshall Davis, Jeremiah Wright, Rashid Khalidi, Bill Ayers, and numerous other America-hating crackpots.

If we lose here, it's the end of human freedom, perhaps for centuries.

WE USED TO HAVE PRESIDENTS WHO NEVER THOUGHT WE WERE GUILTY OF BEING AN ARROGANT NATION OR THAT WE WAGED UNNECESSARY WARS. OR THAT WE NEED TO APOLOGIZE FOR OUR ROLE IN THE WORLD.

* NOW, WE HAVE A PRESIDENT WHO WANTS US TO EMULATE EUROPE - THEIR HIGH TAXES, THEIR CO2-CURBING LAWS, THEIR ... SOCIALISM.

* EUROPE: WHERE THE AVERAGE UNEMPLOYMENT FOR THE LAST DECADE HAS BEEN 8.5%.

* I MEAN..... ER UM, THE LIBS ARE FREEEEEEEAKIN' OUT THAT WE HAVE 8.5% UNEMPLOYMENT AND THEY WANT US TO EMULATE THE ECONOMIC POLICIES OF EUROPE WHERE THAT'S BEEN THE AVERAGE FOR A DECADE!

* IDIOTS. UNPATRIOTIC IDIOTS - WHOSE POLICIES WILL TURN AMERICA INTO A THIRD WORLD NATION - IF WE LET THEM.

* POLICIES LIKE IMMIGRATION RELAXATION, CO2 REGULATION, HIGH TAXES, BIG USELESS AND UNNECESSARY GOVERNMENT PROGRAMS... THEY WILL MAKE US MORE LIKE VENZUELA THAN CANADA.

the best way to explain it is neither the left's fixation on appeasement or retreat, but the left's desire to IMPOVERISH AMERICA - materially and spiritually.

This might be the unified theory which entirely explains the left's strategy and tactics.

Maybe we should call it " The Left's Thirdworldization of America."

The left has long had a long and weird romance with the Third World.

After they realized that the world Marxist revolution wasn't going to arrive as Marx had thought - via the industrial nations - the left felt it would come via the Third World whom they painted as victims of the First World. And - since the left also blames the poverty of the Third World on the first - they see making us a Third World nation too as some sort of cosmic justice and retribution.

Turning America into a Third World nation is their wet dream. No doubt, one of Barry’s dreams from his father - (and it matters not whether that is Barack Senior or Frank Marshall Davis).

And of course… if the left can make America just another Third World nation, it will halt the impending anthropogenic global warming CATASTROPHE!

And making the USA into a poor Third World multicultural nation will make us too weak monetarily and morally to stand up to tyrants anywhere - or in leftist jargon, "to bully the rest of the world, be the world's self-appointed sheriff - and prop up the evil zionists".

So... there's another benefit for the left: their pals - the peaceful, woman-adoring, inventive muslims - get to retake the Holy Land.

For a leftist, what’s not to love about destroying the USA?

Because the left falsely blames the West for most of history's genocide, global warming and pollution and animal extinction, sexual repression, Third World Poverty, they probably wish that Obama would do it even faster.