Great news from the border: cartels kidnapping bus passengers for gladiatorlike fights to the death

As Mexico descends into all all-out civil war between drug cartels, the level of barbarism almost defies belief. 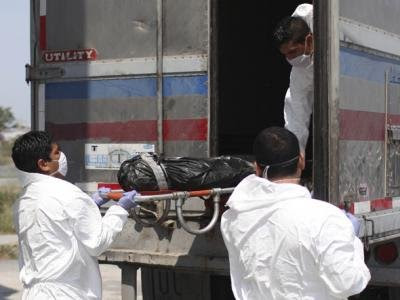 The elderly are killed. Young women are raped. And able-bodied men are given hammers, machetes and sticks and forced to fight to the death.

In one of the most chilling revelations yet about the violence in Mexico, a drug cartel-connected trafficker claims fellow gangsters have kidnapped highway bus passengers and forced them into gladiatorlike fights to groom fresh assassins.

...If what he says is true, gangsters who make commonplace beheadings, hangings and quartering bodies have managed an even crueler twist to their barbarity... Members of the Zetas cartel, he says, have pushed passengers into an ancient Rome-like blood sport with a modern Mexico twist that they call, "Who is going to be the next hit man?"

"They cut guys to pieces," he said... The victims are likely among the hundreds of people found in mass graves in recent months, he said... In the vicinity of the Mexican city of San Fernando, nearly 200 bodies were unearthed from pits, and authorities said most appeared to have died of blunt force head trauma.

Many are believed to have been dragged off buses traveling through Mexico, but little has been said about the circumstances of their deaths... The trafficker said those who survive are taken captive and eventually given suicide missions, such as riding into a town controlled by rivals and shooting up the place.

40,000 people have died in Mexico's ongoing civil war over the past several years.

Just Thursday, authorities in Mexico said they arrested members of the Zetas and seized 201 automatic weapons, 600 camouflage uniforms and 30,000 rounds of ammunition... With the recent killing of the ICE agent and perhaps other attacks, the Zetas also are breaking the golden rule for Mexican traffickers: Don't kill Americans, he said. It brings too much heat. ...the [drug] checkpoints Mexican officials operate along the highways between Central Mexico and the border do not pose much of a problem, Juan said... The trick, he confided, is to send someone in advance to bribe a commander so a drug load won't be bothered.

These incidents, of course, highlight the egregious failure of the federal government to secure the border.

The Tucson Citizen reports that many Arizonans believe illegal aliens are to blame for the massive wildfires now engulfing the state.

The two largest wildfires burning in Southern Arizona originated in rugged, mountainous corridors frequently used by cross-border people and drug smugglers... And the U.S. Forest Service has determined that both fires were human-caused. 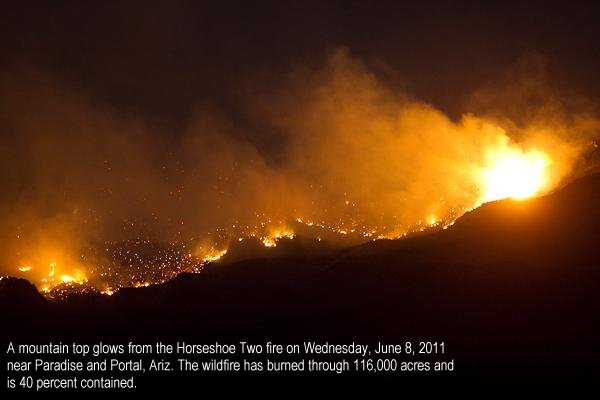 So even though the investigations remain open, speculation is ablaze that illegal immigrants or smugglers are responsible for the Horseshoe 2 Fire northeast of Douglas and the Murphy Complex Fire northwest of Nogales.

“It’s definitely not caused by somebody on a picnic whose wiener overcooked,” resident Brad Titcomb said about the Murphy Fire, which came within a mile of his house in the Aliso Springs neighborhood west of Tubac. “This is illegal traffic one way or another.”

Which makes the failure of the Obama administration to secure the border all the more outrageous.

If you go to BlogdelNarco, you won't believe what you see. Not for weak stomachs or excitable imaginations.

If true, this justifies a war of extermination against the drug cartels--and any and all supporters.

Just the way obama likes huh ah, huh ah. The left kills a whole flock of birds enabling border insanity, from burdening border states and the folks who live there with enormous costs, crime and degradation of society, not only that, Holder and Obama have been arming these maniacs to the tune of over 3000 known guns allowed to walk across the border via straw buyers, using the lie the ATF is trying to trace these weapons to Mexican criminals. the truth is worse than the lies, it is a set up designed to create another lie that guns need to be outlawed because our 2nd amendment rights are the cause of all the blood and murder south of the border.