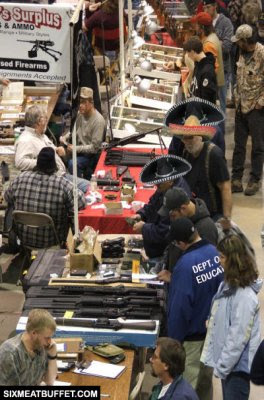 The Economics of Settlement: Gilder
Our Friends the Chinese: Ricochet
The Muslim Brotherhood and Weiner: AT

Happy Father's Day: Pundette
How to wake up your girlfriend: C&S
How to get exit row seats (chart): Airfare Watchdog

Tweet Me! No, Really!: MOTUS
The Conspiracy of Kennedy Conspiracists: Ace
Don't get your yarbles caught in this machine: NatLamp

Thanks for the link.

Doug, a couple of days ago you wrote about the burgeoning welfare state and its implications.

Not only can't we afford it, it saps the American work ethic and its founding principle of limited government.

On the topic of Obama’s Fast and Furious impeachment, just a couple of questions:

First, How stupid do they think we are?

Obama, Shrillary and the rest of the Communists and gun grabbers come out with the bogus factoid of the 90% myth and they expect us all to swallow it hook, line and sinker. Then “Someone” in the most transparent of presidential administrations sets up a program specially designed to funnel guns across the border to back up this claim.

How did they think we we’re going to find out about this and demand some fast and furious resignations?

Did they really think that we would just surrender our rights to defend our selves just because of this little fraud of theirs?

Reports are that they delighted in the reports of traceable guns being found at crime scenes, in ontehr words, they were giddy at the carnage their stupid plan inflicted on people.

Don’t the democrats care about people? Or are they really just pawns in a struggle for control of everyone’s life.

They had to have known that just letting these guns “Walk” would have resulted in crime, death and destruction.

Why didn’t they care about the ‘results’ of their little plan to subvert our Constitutional rights????