If the 72 rounds of golf and eleven weekends in a row of hitting the links hasn't convinced you, perhaps this will.

It's very reassuring to see the president cracking jokes about his anemic economic record. Jobless Americans will surely be rolling in the aisles of unemployment offices nationwide, thankful in the knowledge we have such a steady hand in the White House.

President Obama's Council on Jobs and Competitiveness met today in Durham, NC at Cree Inc., a company that manufactures energy-efficient LED lighting. One of the Council's recommendations to President Obama was to streamline the federal permit process for construction and infrastructure projects. It was explained to Obama that the permitting process can delay projects for "months to years ... and in many cases even cause projects to be abandoned ... I'm sure that when you implemented the Recovery Act your staff briefed you on many of these challenges." At this point, Obama smiled and interjected, "Shovel-ready was not as ... uh .. shovel-ready as we expected." The Council, led by GE's Jeffrey Immelt, erupted in laughter. 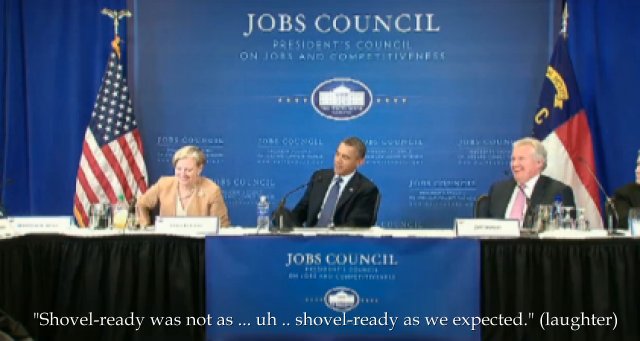 After he was done yukking it up, Obama flew our our dime down to Miami for a trio of fundraisers...

And if you really want to crack up, Pimco chief Bill Gross has another great one-liner: "When adding in all of the money owed to cover future liabilities in entitlement programs the US is actually in worse financial shape than Greece and other debt-laden European countries."

Maybe our politicians could take a cue from the Greek parliament, which appears to be preparing evacuation tunnels for the moment on Wednesday when 100,000 public sector workers find out they're toast.

This appears to be the case on practically every Beltway exit.

'Putting America Back To Work - Tearing Sh*t Up' Heh.

"Those silly peasants still can't find any jobs! AHHAHAHAHAAA! Like any of us even care!"